In and around Dunkerque

Gravelines: An amazing obsession and a remarkable moat

Fun things are afloat in this sleepy backwater five miles from the Dunkerque ferry port. 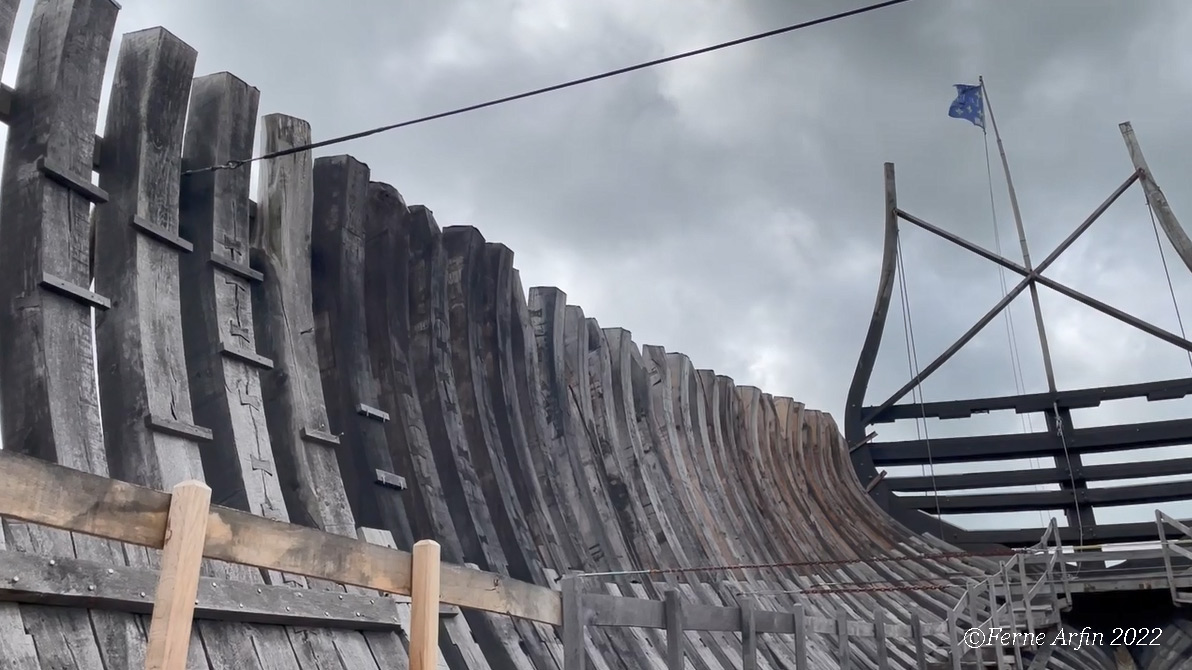 Gravelines near Dunkerque at the mouth of the River Aa  (crossword puzzle fans take note), is a French seaside town and historic Flanders port. It once was the main entrance to the waterways of northern France from the North Sea and the eastern reaches of the English Channel. It was so strategically important that efforts to improve its navigation date from as early as the 12th century. Gravelines was protected by walls long before Louis XIV sent his engineer, Vauban, to create one of his characteristic star-shaped fortresses around the town in the early 17th century.

Today the town, still surrounded by Vauban’s walls, is something of a sleepy backwater. It has a pretty town centre and marketplace, a stripey lighthouse with a sand yachting school near its base, France’s only museum devoted to drawing and prints and Vauban’s intact, bastioned ramparts to stroll along. But what really makes Gravelines worth the 15-minute, five-and-a-half-mile drive from the Dunkeque ferry port (or slightly longer from Calais), are two unusual and eccentric attractions.

Bringing the past to life at Espace Tourville

Carpenters, blacksmiths and shipwrights are building a 17th-century ship-of-the-line just like one that could have sailed with the Sun King’s navy at Espace Tourville on the edge of Gravelines. They are building it from scratch – from forging the tools to creating the plans from an era when skills were passed down by example and detailed ship architecture plans barely existed. The project has been going on since the 1990s – supported by a membership organisation of about 3,500, funds from various European and French heritage organisations, some volunteer efforts, and admission fees from tourists who come to see the work in progress. And the ship along with its “theme park” artisan village is not expected to be completed until around 2030.

And all of this activity was set in motion by one man with an idea verging on an obsession. The story begins about 40 years and 300 miles distant, off the coast of Normandy near the Saint Vaast la Hougue on the Cotentin Peninsula. In 1982, diver and 17th-century enthusiast Christian Cardin discovered the wrecks of six ships. They were part of King Louis XIV’s fleet, commanded by Admiral Anne-Hilarion de Tourville and headed for battles with the combined English and Dutch fleets.

After discovering the undersea wrecks and creating an association to investigate them, Cardin persuaded authorities to establish a museum on Tatihou, a small island just off la Hougue. The Maritime History Museum of Tatihou opened in 1992. By then Cardin was already dreaming up his next project, and setting out, successfully, to raise funds and enthusiasm for the construction of a first-class naval ship of his favourite period.

From la Hougue to Dunkerque

Flash forward 30 years and we’re in a loose facsimile of a 17th-century shipyard, Espace Tourville, Gravelines, on the outskirts of Dunkerque. Surrounded by a blacksmith’s forge, a carpentry workshop, a model studio, a tavern, an exhibition and a smokehouse, Le Jean-Bart – a 17th-century vessel – is being constructed from the keel up. Why the Dunkerque area? Well, that’s another long story involving economics, demographics, various authorities and space. But it’s worth noting that in the 17th century, one of King Louis’s shipyards was in Dunkerque.

In the model studio, a large scale model of the Jean Bart (left) shows the ultimate aim. Meanwhile, outside in the shipyard, construction of the actual ship is underway (right). Photos ©Ferne Arfin2022

Because blueprints were not used to build vessels of this period, the design of  Le Jean Bart (named in honour of a local privateer and hero), is a research project in itself. Shipwrights are working from a set of 50 2-dimensional, anonymous 17th-century drawings kept at France’s naval archives in Vincennes, and from 3D data obtained from the shipwrecks Cardin discovered off La Hougue.

A ferry trip from Dover to Dunkerque

Recently I joined a small group of journalists for a cross-channel ferry trip from Dover to Dunkerque as a guest of DFDS Ferries. We visited a variety of sites and visitor attractions – some well established with French holidaymakers, some newly developed. Despite its important place in WWII history, the Dunkerque area, France Nord, is often overlooked by visitors who drive through en route to destinations in Belgium, the Netherlands and Germany.

It’s time to change all that. Like its also once overlooked neighbour, Pas-de-Calais, there’s more than enough to do in and around Dunkerque for an entertaining short break or even a day trip with a French lunch and some duty-free shopping thrown in.  To show you what I mean, over the next few weeks I’ll be adding more blog posts about things to do and see in or near Dunkerque.

Prices and information accurate at the time of publication.

How to visit Espace Tourville and Le Jean Bart in Gravelines, near Dunkerque

By the time it’s finished, around 2030, thousands of visitors will have watched the ship’s construction and heard its story. Visitors can shop for local products – including smoked goods from the site’s own smokehouse – and stop in the tavern for a local beer or a meal of Flemish specialities. The attraction is open year-round but opening days may vary so check the website for current schedules and prices.

And about that remarkable moat

If you’ve ever visited a castle or a medieval fortified village, you probably have an idea of what a moat looks like. If it’s not just a dry ditch – and many of them are – it’s probably a murky, narrow channel, overgrown with water weeds and only as wide as the drawbridge that once crossed it. Now, take a look at the moat that surrounds Gravelines. 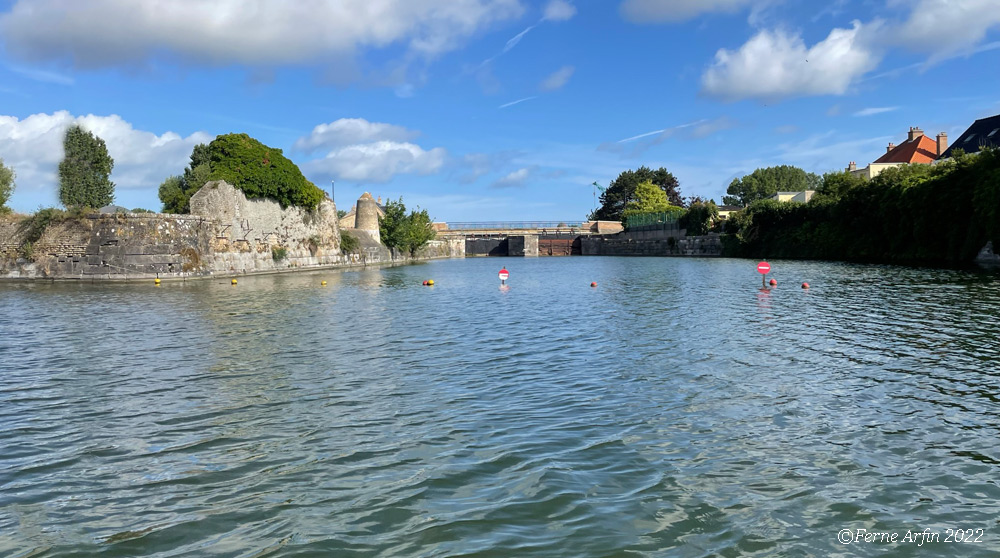 Wide as a river, and with a set of water gates to control tidal flows, the Vauban Promenade completely surrounds the town walls. They were begun by Charles V in the 1500s and completed, along with some extra channels around islets, by the Marquise de Vauban, who left his characteristic star shaped style of fortifications all over Louis XIV’s France. 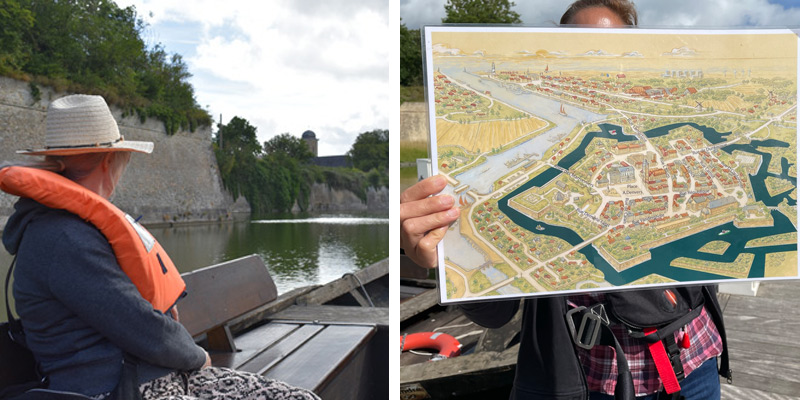 A cruise around the town of Gravelines takes a very peaceful hour and offers a close-up look at Vauban’s fortifications.

Cruising Gravelines’ “fil de l’eau” is a great, serene break from a hectic touring holiday. It takes about an hour for a guided cruise around the town (on its unique moat) in an electric-powered bacôve. The bacôve is a large, shallow-draft, traditional wooden boat that dates from the Middle Ages. It came into its own in this region during the late 19th and early 20th centuries when local farmers used it to transport their cauliflower to market. Today it is being used for tourism across northern France.

Bacôve tours, from the Embarcadère Vauban Promenade, are available for individuals and families on scheduled dates during the summer months. Or, the traditional boats can be booked in advance for groups of up to 12. Pedaloes, rowboats and small electric-powered boats to sail on the moat can also be rented on the Embarcadère. Visit the Dunkerque Tourism Office website for current prices and schedules.

Add taste of Tenerife to your cooking

Patrick Bauduin via FlickrIn and around Dunkerque: Malo-les-Bains
Scroll to top