In and around Dunkerque

Malo-les-Bains – Reinventing the beaches of Dunkerque 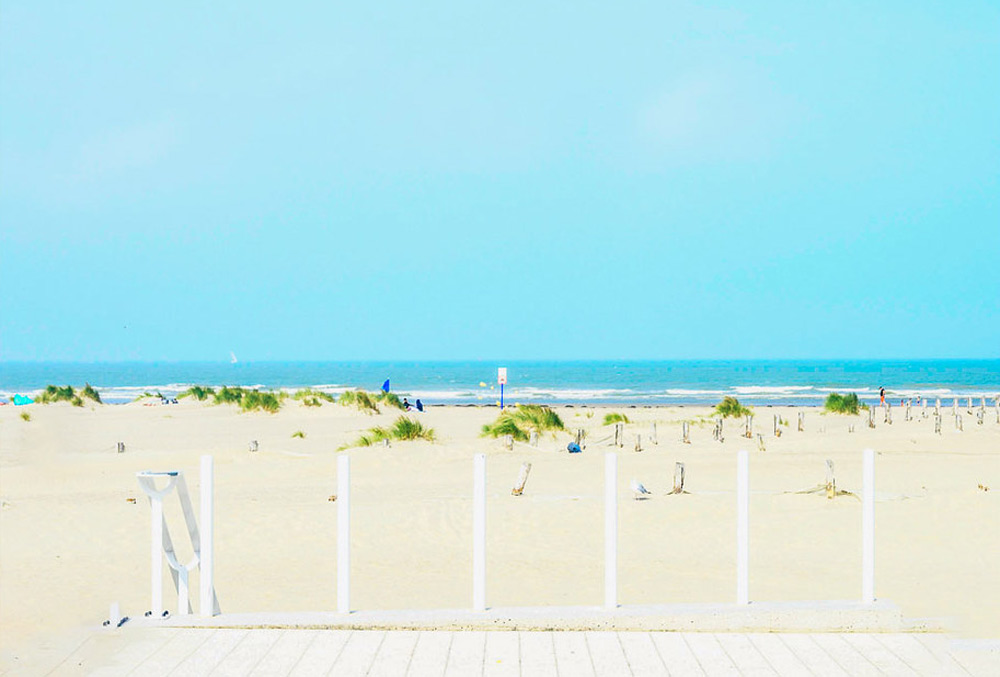 Stroll along the beach promenade of Malo-les-Bains Dunkerque and little reminds you that this stretch of flat, golden sand  (and the 10 kilometres of it east to the Belgian border) is hallowed ground. Children with buckets and spades splash in the shallows, teenagers play kickball and 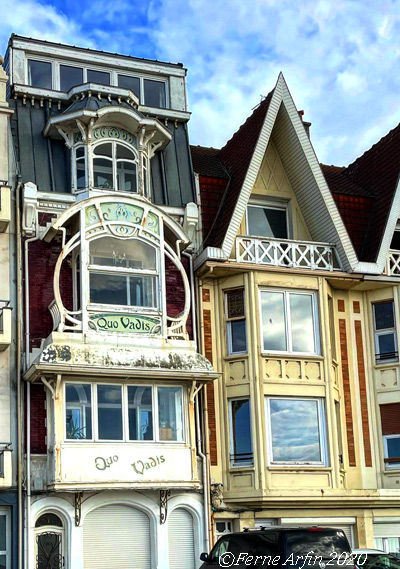 Frivolous Belle Epoque and Art Deco houses line the seafront. They look original but are more than likely reconstructions. Dunkerque was virtually flattened by the Nazis as they pursued British and French soldiers across Belgium onto these French beaches.

grannies sunbathe outside a run of festive striped beach huts. Musicians set up stands and hang fluttering flags for a festival concert. Here and there, strange, brightly coloured art installations dot the paved promenade. And opposite the sands, seafood restaurants, cafes, gelato shops and bars jostle for space alongside the fanciful facades of Belle Epoque and Art Deco buildings.

But hang around until low tide and you may see the bones of one or two little ships that never made it back out to sea with their cargo of British, French and Belgian soldiers being evacuated between 26 May and 4 June 1940.

More than 1,000 little ships, of which at least 850 were small privately-owned vessels took part in Operation Dynamo. Fishing boats, pleasure boats, and small inland cargo vessels sailed from Ramsgate on the English coast under the flags of England, France, Belgium, Poland, the Netherlands and Norway. They ferried more than 338,000 allied troops to waiting warships and troop carriers in the English Channel, or, in some cases, all the way back to English ports. Two hundred were sunk and the wrecks of some can still be seen. On Zuydcoote Beach, just east of Malo-les-Bains, the wreck of the Crested Eagle, a paddle wheel steamer that once plied the Thames Estuary and the east coast to Felixstowe, emerges at low tide.

One foot in the past but looking to the future

Christopher Nolan’s award-winning 2017 film, Dunkirk , the highest grossing WWII film of all time, has brought the story of this epic evacuation to the attention of many younger people and drawn them to the Malo-le-Bains Dunkerque area (French spelling) for the first time.  Accommodations to attract new tourism include a colourful Aparthotel (named number one for value on Tripadvisor) and a luxury Radisson Blu Grand Hotel and Spa set to open in November 2022.

Striking new architectural features include the Passerelle du Grand Large, a footbridge that mimics the historic masts of the port of Dunkerque by architect Brigit de Kosmi. It connects the Dunkerque docklands with Malo-les-Bains through another of the town’s newer attractions, the breathtaking glass-encased artspace, FRAC Grand Large.

The Passerelle du Grand Large footbridge, left, mimics the sea of masts in the Dunkerque docklands. Photo by Sophie Louisnard on Unsplash. Dunkerque’s contemporary art space, FRAC, right, strikingly repurposes a heritage building by wrapping it in glass and twins it with a new structure. Photo by Eric Huybrechts, ccl via Flickr

Le FRAC Grand Large, located in the former shipbuilding district of Dunkerque (le Grand Large) is one of 23 FRAC (Regional Contemporary Art Fund) buildings around France. The role of the FRACs is to build local contemporary art collections in France’s regions. The Dunkerque FRAC won the Pritzker Architecture Prize 2021 for its architects Anne Lacaton and Jean-Philippe Vassal.

What you might see inside for the €4 price of admission depends upon the exhibition schedule. But aficionados of architecture and design will be fascinated by the “twin shed” structure itself. The architects chose to preserve the site of a former shipbuilding workshop, part of the area’s heritage, with a twin structure of identical dimensions – both buildings enclosed in glass. The original 1949 workshop, Halle AP2, is as tall as the Turbine Hall in London’s Tate Modern and provides a vast empty space for large installations – complete with an enormous crane.  The newer building is multi-level and divided into many galleries and multi-purpose spaces that can be seen through the glass frame. The two buildings are connected by an interior “street” that links the footbridge described above with the docklands area.

LAAC (Lieu d’Art et Action Contemporaine), located nearby and also within sight of the beach, is a modern art museum that focuses on work created between 1945 and 1980. It hosts two major exhibitions a year, has an impressive sculpture garden and a permanent collection of 1500 works exhibited in rotation in a gleaming, white ceramic building.

While new developments and sparkling new museums, beach festivals and rows of candy-striped beach huts, a skate park and a huge ice skating rink serve to draw new generations of holiday makers, there is no getting away from the history of this place. Like Pearl Harbor, the name Dunkirk/Dunkerque and its heroic and tragic connections resonates through history. While 338,000 British, French and Belgian soldiers were evacuated from these beaches, between 30,000 and 40,000 were left behind to be captured by the Germans. About 16,000 French and 1,000 British were killed during the evacuation and 90 per cent of the town was destroyed. 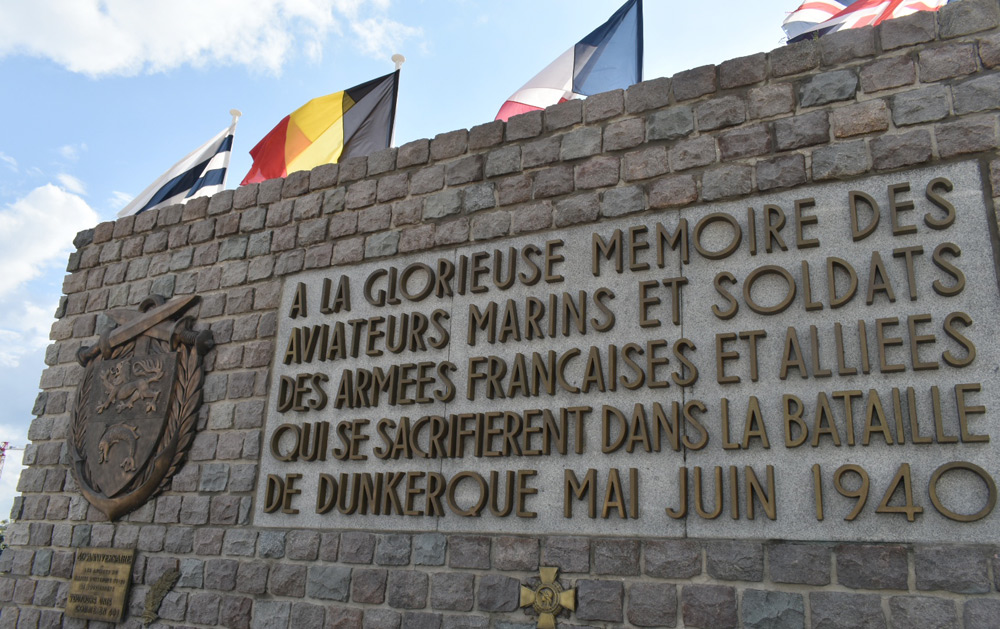 One of several war memorials in Dunkerque, this one is dedicated “To the glorious memory of the aviators, sailors and soldiers of the French and Allied armies who sacrificed themselves in the Battle of Dunkerque May June 1940.” Photo by Ferne Arfin 2022

The Musée Dunkerque 1940 – Operation Dynamo, in a mid-19th century seaside fortress, gives a visceral reality to the facts and numbers of the 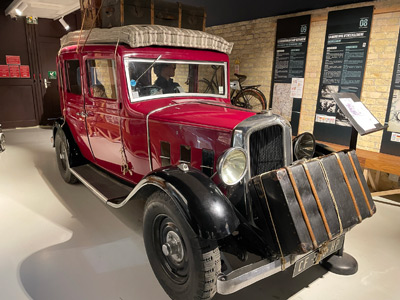 At the Dunkirk War Museum – Operation Dynamo, the story includes the plight of the local civilians fleeing the Nazi attack. Photo by Ferne Arfin 2022

biggest naval evacuation in history. It’s not a very big museum and if you are only attracted to modern exhibitions full of multi-media bells and whistles you may be disappointed. But give yourself time to watch the jerky black and white cinema footage of the day and to read the details and the first-hand accounts and you will discover the very human stories of those nine days. Alongside examples of armaments and guns left on the beach, there’s a private car laden with all a fleeing family’s household possessions, even a mattress. The museum is open every day, from early February to the second week of November.

For more about Operation Dynamo and related historic sites, exhibitions and landmarks, visit the Spirit of Dunkerque page on the official tourisme website.

Finally, raise a glass with an original Dunkerque veteran

The PS Princess Elizabeth, a historic paddle steamer, accompanied by its own small flotilla of little ships, rescued more than 1,673 soldiers from the beaches of Dunkerque.  The ship survived four trips back and forth across the English Channel, each time carrying several hundred troops. 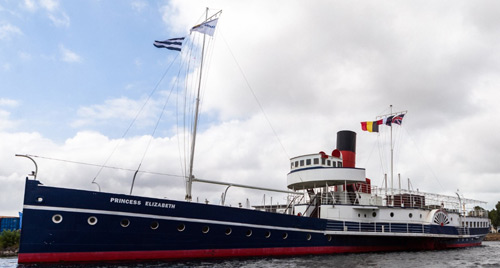 Originally built in the mid-1920s as a packet boat for the Royal Mail, she sailed between the Isle of Wight and Southhampton. She had been serving as a minesweeper under the British Admiralty when the evacuation from Dunkerque began and she was ordered from Dover to take part. After the war, she was a floating casino and then a restaurant on the Thames. In 1999, she was moved to Dunkerque and she took part in Christopher Nolan’s 2017 film, reliving her role in Operation Dynamo.

Now, permanently docked in the Dunkerque Marina, she has been sensitively restored as a vintage vessel and serves as a bar and restaurant where tea and lunches are served.

The quickest and most comfortable way to get to Malo-les-Bains Dunkerque is direct, by ferry from Dover. You can also cross to Calais, only a short drive away. DFDS UK operates car ferries from Dover to both ports.

Prices and information accurate at the time of publication. During this trip I was the guest of DFDS Ferries however, all observations and opinions are my own.

In and around Dunkerque: Gravelines