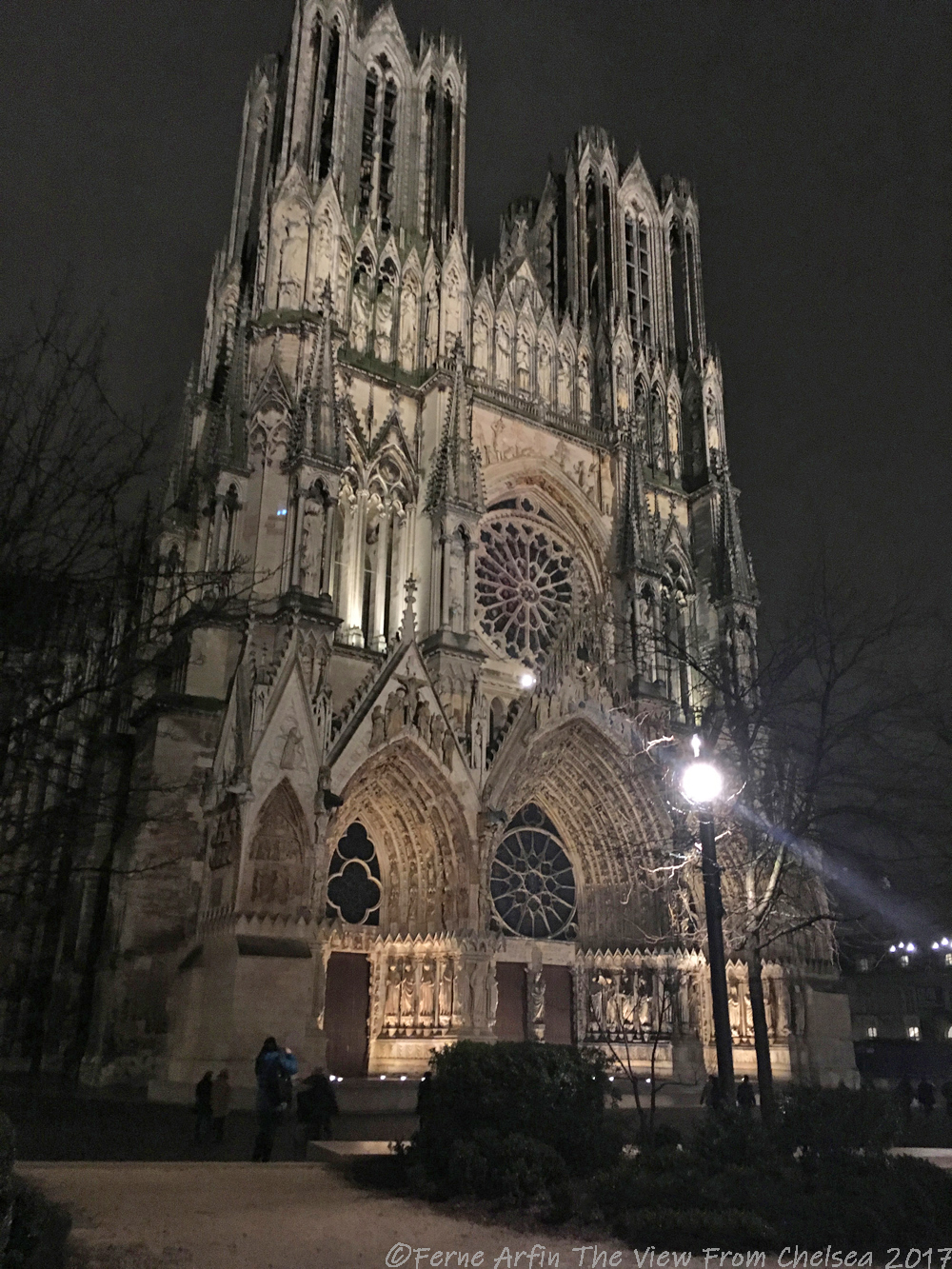 Gothic survivor and cathedral of kings

Reims Cathedral, Notre Dame de Reims, is one of the world’s great masterpieces of Gothic architecture. It’s also a battle-scarred survivor with more facelifts to its name than Dolly Parton.

Reims Cathedral sits on the spot where French kings were crowned for nearly 900 years. It’s the centrepiece of a collection of ecclesiastical buildings that, together, make up one of the city’s two UNESCO World Heritage sites. (Its position as the Capital of Champagne is the other).

In its current incarnation, it may be about 50 years younger than Notre Dame in Paris. But Reims Cathedral is larger and was at the heart of Christian Europe more than 700 years before the Paris cathedral was built.

Smiling Angel of Reims Cathedral lost his head in World War II and its restoration became a local cause celebre and an icon of the city. photo public domain, Wikimedia Commons

More than 2,300 statues march across its facades, including a gallery of 56 kings. There are a variety of biblical scenes, and a gently smiling angel that, after it lost its head in 1914 to German shrapnel, became an icon of the city.

But the most remarkable thing about Reims Cathedral is that it is standing at all.

The first Cathedral of Reims was founded in 401 by an early bishop, St Nicasius, who was beheaded by the Vandals a few years later. The site may have already been sacred as it was thought to be the location of Gallo-Roman baths which were usually associated with Roman shrines.

In 496 (thereabouts – the dates come from early chronicler writing half a millennium later) St Remi, the apostle to the Franks, baptised Clovis, the first king of all the Franks, and 3,000 of is followers in that first cathedral. Through his conquests of other Frankish tribes, Clovis founded the dynasty that ultimately led to the unification of France under a single monarch.

Later, Clovis was crowned here and the cathedral received papal permission to anoint future kings. In 1226, after he was crowned at Reims, twelve-year-old boy-king Louise IX declared that all future French kings would be crowned at Notre Dame de Reims. In all, that included 33 French monarchs. The last was Charles X in 1825.

On again off again, Reims Cathedral rises and falls

Yet through it all, the cathedral’s 806-year-old  gothic bones remain virtually intact, its façade a medieval masterpiece. Try to see it lit up at night when the wildly exuberant creativity of centuries of stone carvers dazzles in the spotlights like giddy champagne bubbles frozen in stone. 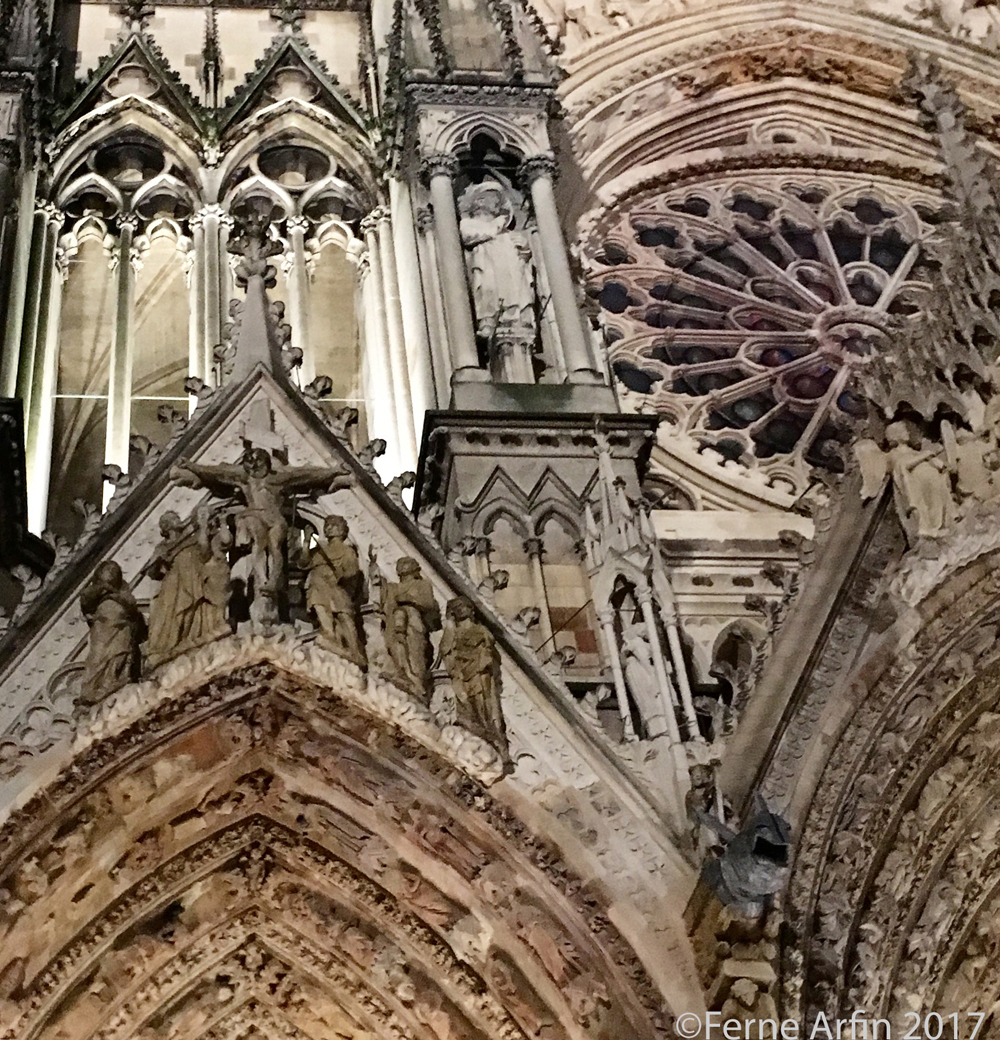 Stone carving on the West Front of Reims Cathedral represents the work of many artisans, including modern restoration experts. 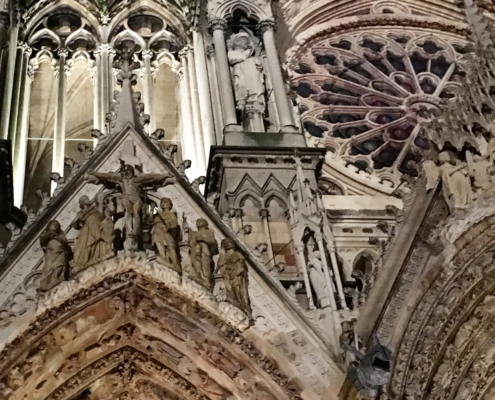 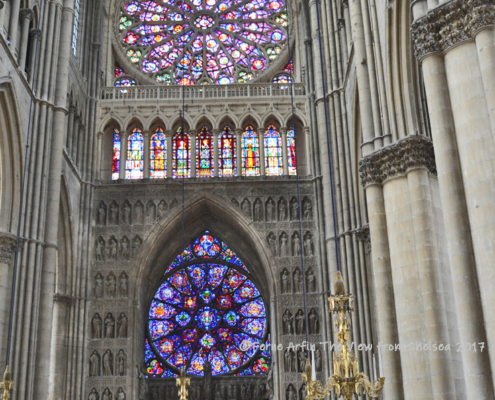 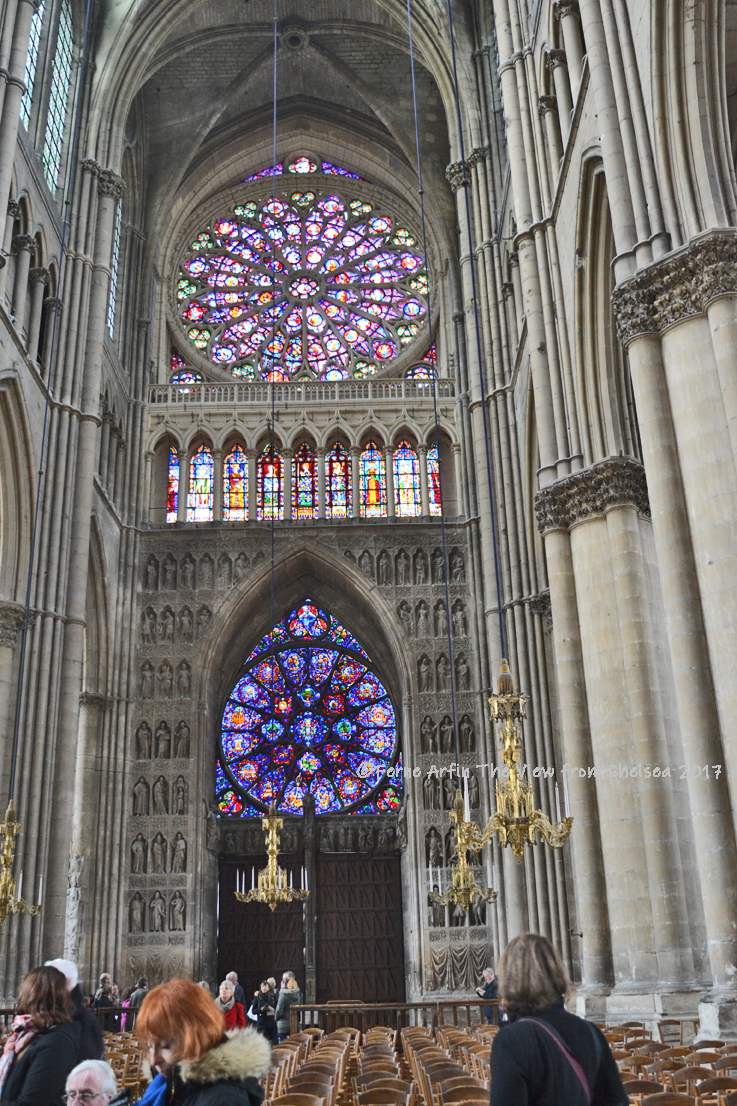 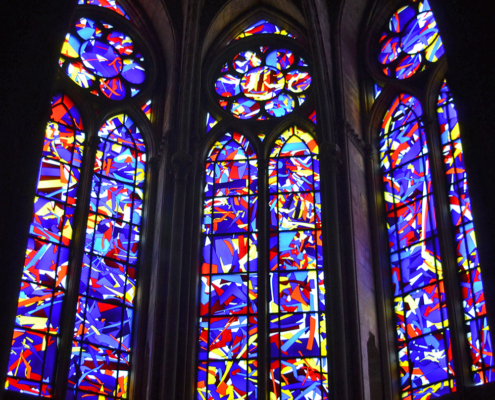 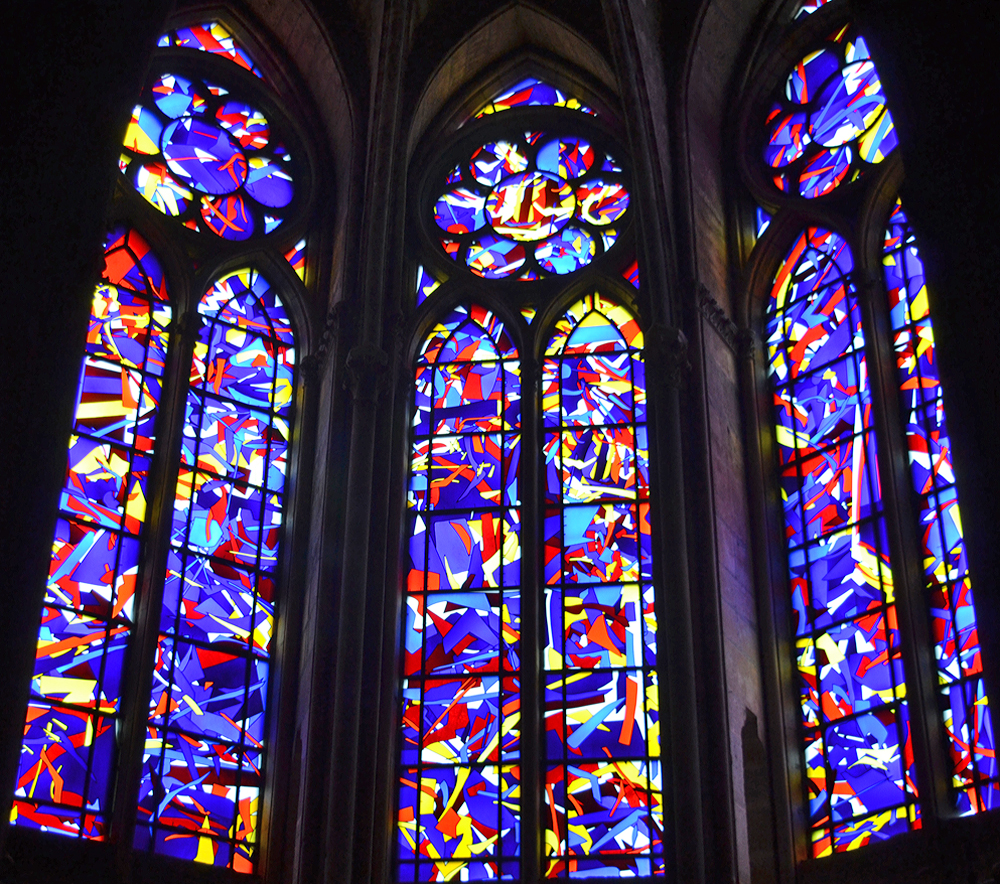 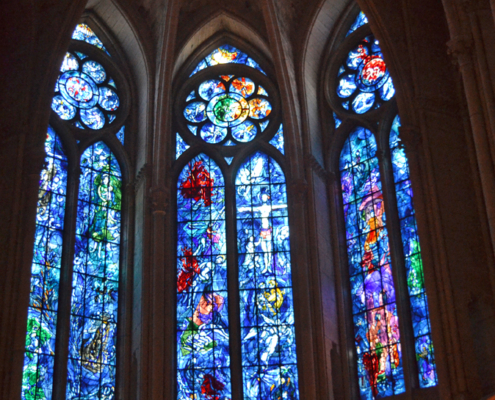 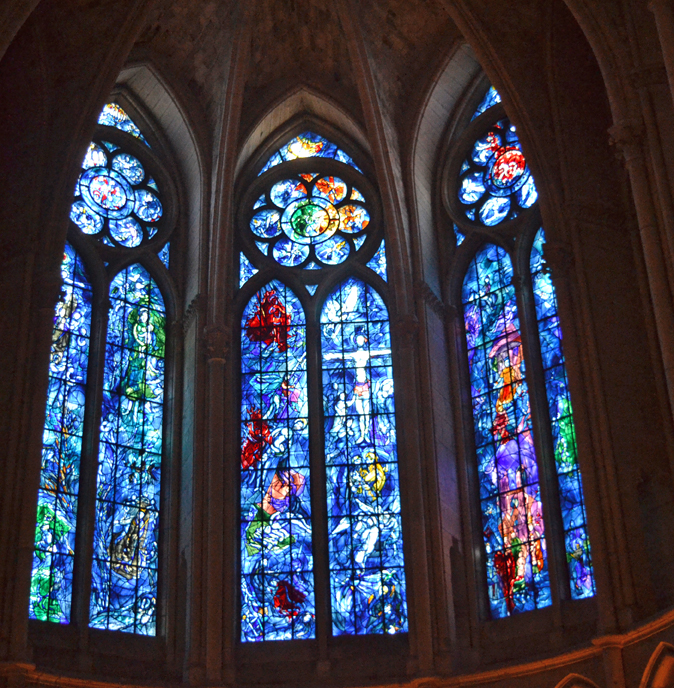 Try to see it after dark when the wildly exuberant creativity of centuries of stone carvers dazzles in the spotlights like giddy champagne bubbles frozen in stone.

What to look for

Among the figures and scenes that make up the facades of Reims Cathedral, look for:

The Reims UNESCO World Heritage site includes several other ecclesiastical buildings. The following are worth exploring too.

The former Archbishop’s residence, known as the Palais du Tau, joins the south side of the Cathedral. Since at least 1138 it has taken its unusual name, tau (the Greek letter t) from the layout of its original floor plan in the shape of a T. Though, to all outward appearances, the palace is a 17th-century building in a classical style, that is only a facade. The bones of the original structures, going all the way back to the early middle ages, still stand and are visible in some parts of the palace.

The palace was created in the 8th century on the site of a Gallo-Roman mansion, it was rebuilt in an elaborate Gothic style in around 1500. Though reconstructed after war damage in the 20th century, the vaulted, arched main hall and some of the decor reproduces the original, early 16th century palace.

After the French Revolution, the palace was used as a military barracks, a court, a prison and, for a while, even as a stock exchange. It was restored in the early 19th century for France’s short-lived revival of the monarchy and the coronation of Charles X. It finally became a museum in 1972.

What to see in the Palais du Tau

The palace museum contains a variety of treasures associated with the cathedral and well worth seeing. 16th-century tapestries depict the life of Clovis I. Original carvings from the West Front of the cathedral, replaced with reproductions after war damage, include the group of figures from the Coronation of Mary that appears above the main portal.

Several precious objects from the cathedral treasury include:

Palais du Tau and its treasures 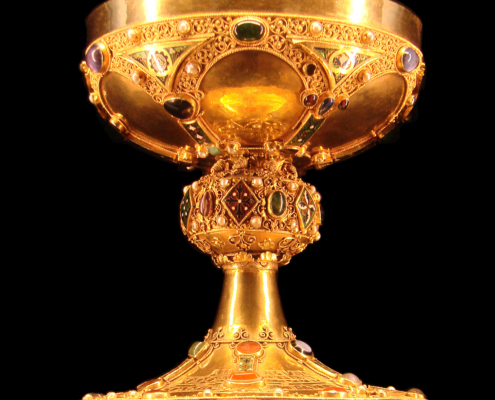 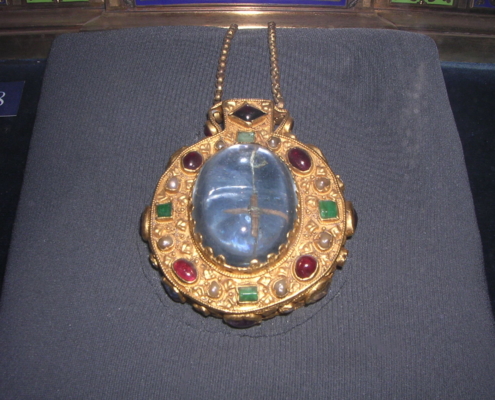 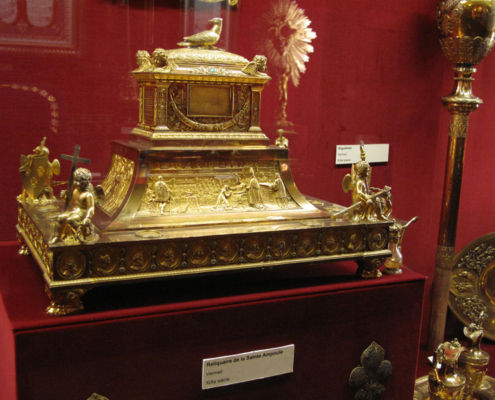 The former Abbey and Basilica of St Remi

The Royal Abbey of St Remi was founded in the sixth century and once held the remains of St Remi, the Apostle to the Franks, as well as the Holy Ampulla that held the oil used to anoint French kings. Today, its 17th and 18th-century buildings are repurposed as the Musée Saint-Remi . Devoted to local archaeology and medieval art, It’s the place to visit to learn about the history of ancient and medieval Reims. The Basilica of St Remi, nearby, is a medieval abbey church built over the chapel where St Remi was buried. It is the largest Romanesque church in northern France. Made part of the UNESCO World Heritage site in the 1990s, it has been a French historic monument since the mid 19th century. 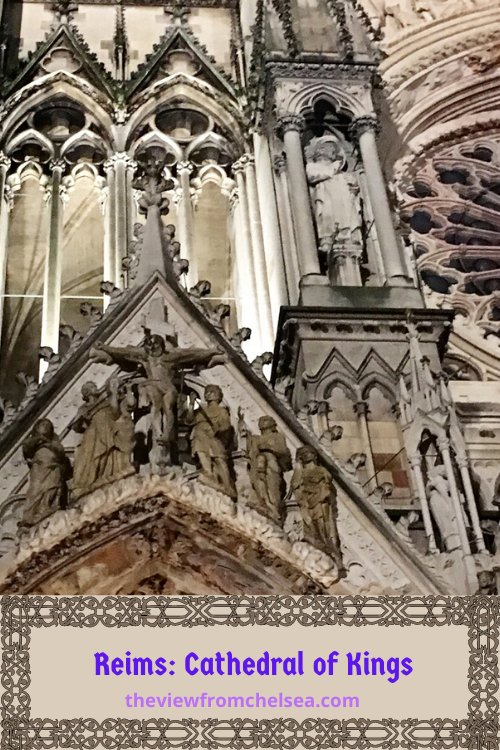 Choose a tour of Reims Cathedral from Viator 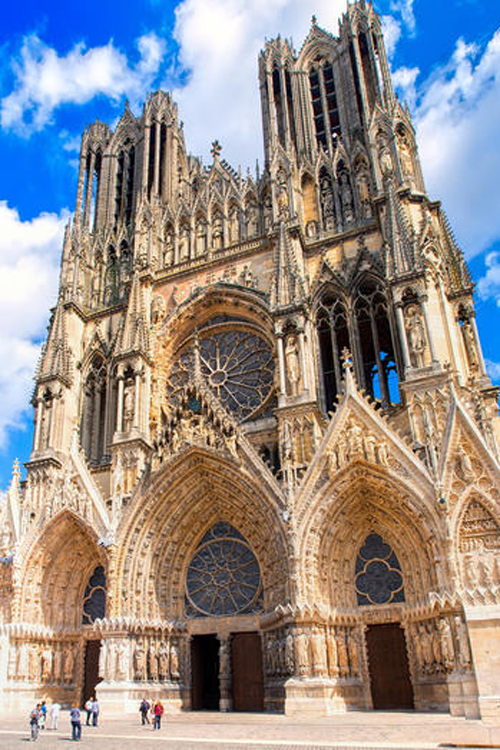