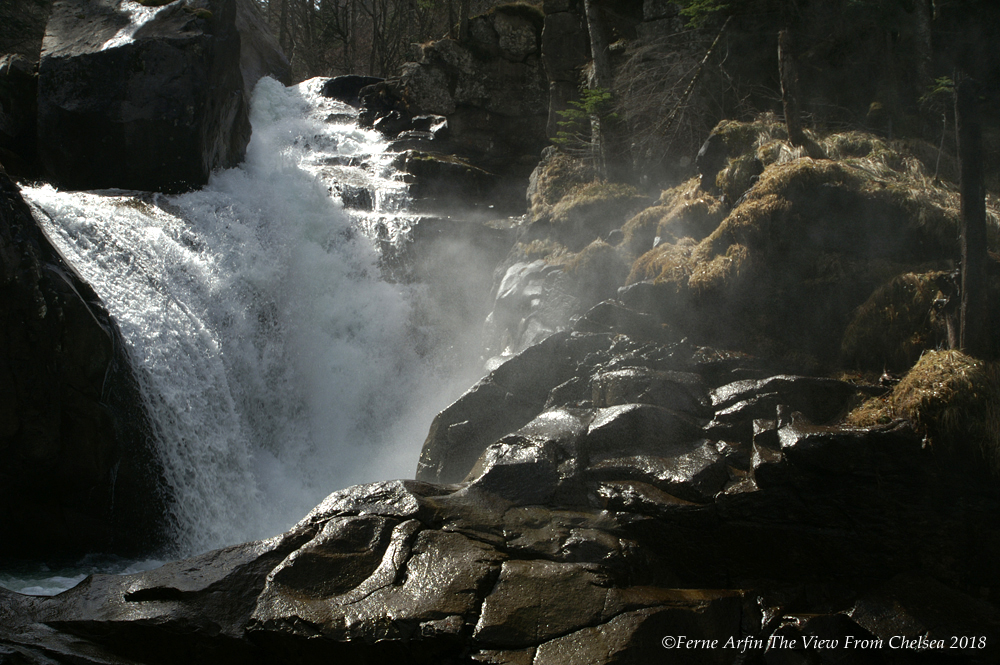 Cauterets: a kingdom of water

In Cauterets, Hautes-Pyrénées, on an early summer afternoon, rushing water is everywhere. A resort popular with the English before WWI, is rediscovered.

Water splashes down mountains in cold, clear torrents. It bubbles up out of the ground, hot, pungent and sulphurous. When the traffic stops on streets lined with mansion blocks straight out of Haussman’s Paris, the sounds of waterfalls vibrate in the air. In the Hautes-Pyrénées, a département with more natural springs than any other in France, the Route des Cascades between Cauterets and Pont d’Espagne is a kingdom of water.

The British, who have discovered this area for budget winter sports within the last few years, rarely see the summer face of Cauterets or hear the music of its waters. Yet it was 19th century British aristocrats, together with their French Second Empire equivalents – and an ever changing côterie of Euro celebrities and socialites – who made Cauterets what it is today.

They came first, as people had been coming since Roman times, for the health giving waters. Following in the footsteps of French-Irish explorer Henry Russell, they came to experience the romance of the mountains, to search for The Sublime. For their summers of high society socialising, they built grand hotels, a casino, a remarkable train station of Norwegian wood (now the Gare Routier or coach terminal) . Princesse Galitzine, a Russian aristocrat, built herself a typically Russian dacha with an adjoining Orthodox Church – both of them still standing. In its heyday, Lord Randolph Churchill, Emile Zola, Victor Hugo, and the actress Sarah Bernhardt were visitors. Even King Edward VII took the waters of Cauterets while staying at the Hôtel d’Angleterre , reputed to be the grandest hotel south of the Loire.

The party paused for World War I and when it resumed, the British did not return. Instead they headed south to sunnier climes that were easier to reach. The resort became a healing centre for rheumatism and respiratory ailments, with prescription spa treatments paid for by the French national health system. The grand hotels were converted to apartments for chic families of means.

Difficult access and lack of summer holiday facilities meant that, for years, only adventure tourists, hikers and mountaineers made their way from the UK to these high valleys once the ski season ended. Now, however, with budget airlines flying direct from London to Pau Pyrénées and Lourdes Pyrénées airports – both within reasonable striking distance – and a glamourously indulgent spa supplementing the older, quasi-medical clinics, Cauterets is ready to welcome British summer visitors once again.

The village of 1,100 is wedged along a narrow plateau at an altitude of 1,000 metres on the edge of the Pyrénées National Park. It’s surrounded by some of the highest peaks in the Pyrénées, yet offers access to splendid views, rapids and cascades over relatively moderate trails. From La Raillère, site of an abandoned spa above Cauterets, a path known as the Sentier des Cascades, follows the Val de Jèret as it tumbles over its rocky bed and drops through a series of picturesque falls, all the way to the Pont d’Espagne. It’s a 4 hour walk that rises nearly 1,000 feet over 12k. 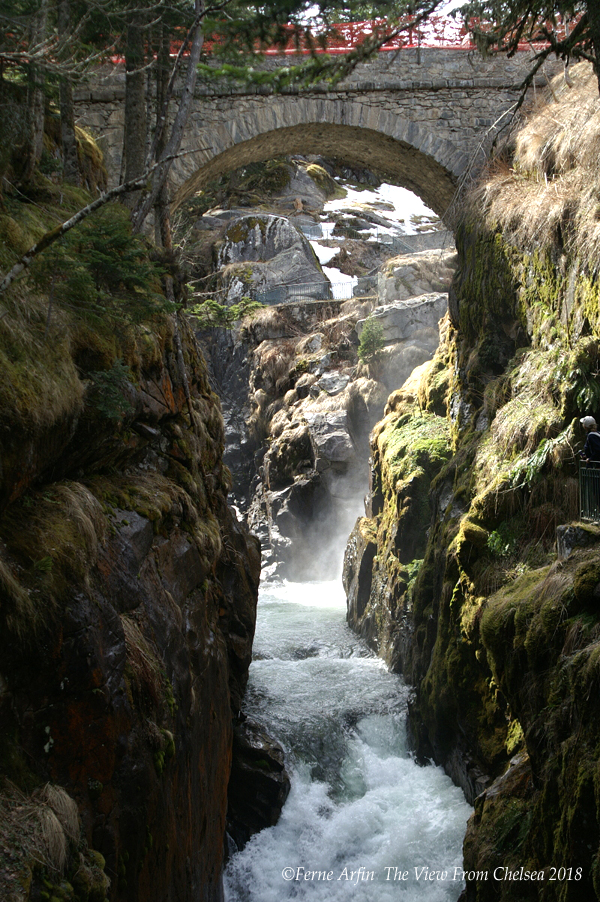 The Pont d’Espagne. a favorite of smugglers, near Cauterets.

We take the lazier way

We opted for the lazier way, by car along the D920, a road that mirrors the path, stopping en route to admire the Cascade Cerisey, above. The waterfall seems to burst from the darkened woods and disappear into clouds of spray in much the same way that Gustave Doré engraved it about 150 years ago.

From the car park below Pont d’Espagne, it’s an easy 10 minute walk to the bridge, a mid-19th century brick arch spanning a narrow chasm, 18 meters above still more raging rapids. The bricks replaced an older, smugglers’ bridge on the route to Spain made of pine tree trunks. A picture of the original bridge, by Hortense de Beauharnais, Queen of Holland and mother of Napoleon III, looks so hair-raising that the smugglers probably earned every elicit sou.

An hour’s more walking on a well-marked path (or a €15 combination  cable car and chair lift  ride from just above Pont d’Espagne) takes you to Lac du Gaube, an oval lake hemmed in by high mountains. Le Pic de Vignemale, the highest mountain in the French Pyrénées, is reflected on its surface. Hôtellerie du Lac de Gaube (http://gaube-seyres.fr, 33 06 37 44 38 64) is a lakeside refuge and brasserie where, like Napoleon III, Victor Hugo, Swinburne (who dove into the lake and wrote about it), and Russell, conqueror of Vignemale himself, you can drink and dine.

Next day we drove down from Cauterets , made a hairpin turn at the crossroads town of Pierrefitte-Nestalas and headed up to Gavarnie, a tiny settlement on the wide, flat floor of the Luz valley, about an hour away. Following a shallow river past a few shepherd’s huts and across grassy, wildflower -strewn meadows we arrived at one of the great sites of the Pyrénées – the Cirque du Gavarnie. Unlike other cirques in France which are single rock faces carved by wind, water or glaciers, Gavarnie is an awesome rugby scrum of peaks; six of them, rising to 3,000 metres, crammed shoulder-to-shoulder against the Spanish border. Pouring over it, from a height of 422 metres, the Grande Cascade de Gavarnie (one of the tallest falls in Europe) is the source of the river Gave de Pau. In winter, daredevils climb the frozen falls. All a summer visitor can do here is stare and gasp. It is well worth the short hike to do just that.

And a good soak after

After so much mountain walking, a good soak is definitely in the cards and where better than the capital of rushing water. So it’s back to Cauterets, where natural and apparently inexhaustible sources provide a constant supply of hot mineral water, at between 55° and 60° Celsius.  Of the town’s three thermal establishments, Les Thermes de César and Les Thermes des Griffons are the more clinical, specialising medical cures. But the newest spa, Les Bains de Rocher (http://www.bains-rocher.fr/, 33 05 62 92 14 20) offers well-being of a distinctly sybaritic kind. The spa, opened in 2011, has pebble walls, jade floors, huge, wrap-around windows and sky lights. Its indoor and outdoor pools, fed by the natural sulphur springs, have bubble beds, integrated Jacuzzis, currents to swim against, geysers and massage jets. There’s a sauna, Turkish baths, tropical showers and a very hot bath (38 degrees) as well as a small children’s area and treatment rooms for facials, massages and other spa treats. It’s all wrapped in mountain views, bathed in clear mountain light and €18.50 buys you two hours to splash around to your heart’s content.

This article first appeared in the Sunday Telegraph. It was updated with new information and prices in March 2018.

Sarasota, Florida: where the circus comes to town

Travel treats for an easier journey
Scroll to top