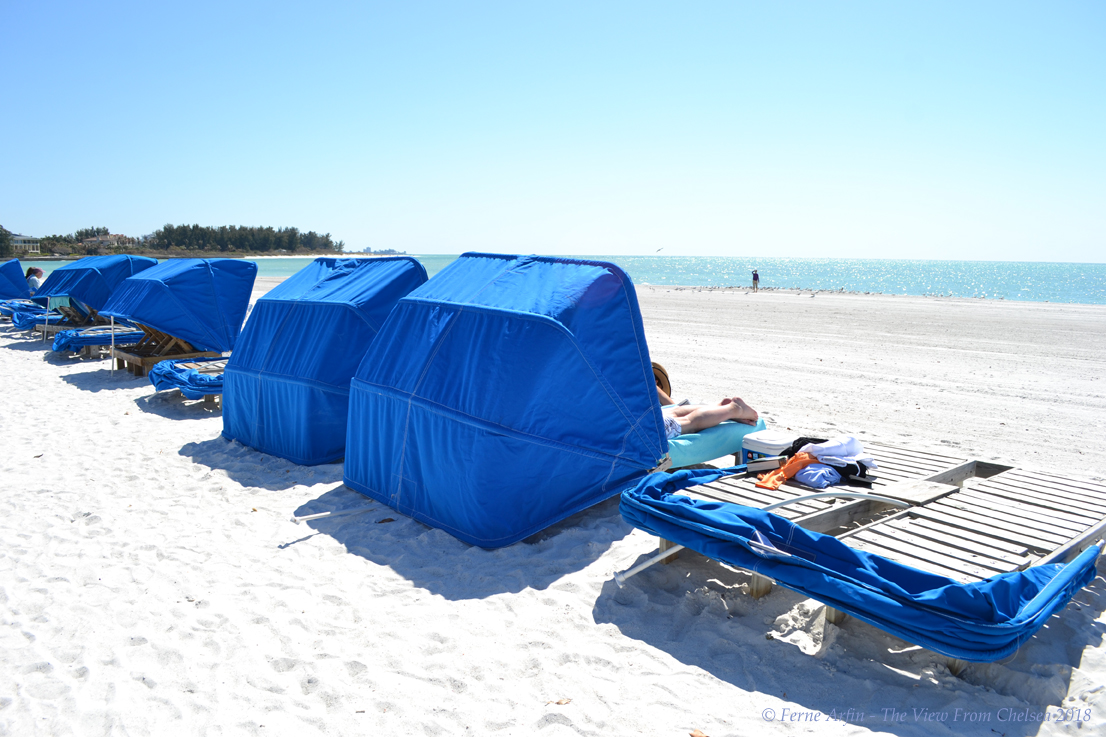 Sarasota, Florida – Where the circus comes to town

Sarasota is almost a film set cliché of what a conservative Florida enclave for well-heeled pensioners might look like. But don’t let first impressions fool you.

On a breezy morning in late February, before the Florida “season” was under way, the wide beach of Sarasota’s Siesta Key was deserted except for us and a woman out walking her dog. Super-fine, pure quartz sand, almost unbearably white in the sun, cushioned our steps and sifted through our toes like cool talcum. The Sarasota I had imagined, a mild and tranquil retreat, was all around.

A day earlier, I had walked around a downtown plump with cultural institutions, including a theatre, a ballet company and a resident opera. Healthy-looking middle-aged couples in matching chinos and cashmeres, worn against what passes for a winter chill in Florida, chatted outside the massive new public library and strolled across garden squares.

Sarasota is almost a filmset cliché of what a conservative enclave for well-heeled pensioners might look like, with serious yachts bobbing in the marinas and pastel-coloured houses lining the golf courses. My guide from the local tourist office did her best to steer me past the rows of immaculately groomed lawns, encouraging me to discover Sarasota’s colourful, multilayered past.

I was taking some persuading.

Then she led me over weathered planks through the scrub pines at the top of the beach and, suddenly, I could see it. 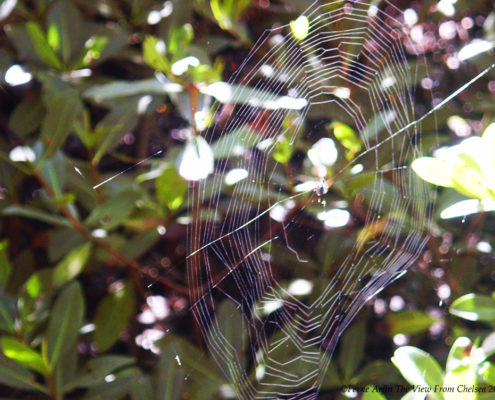 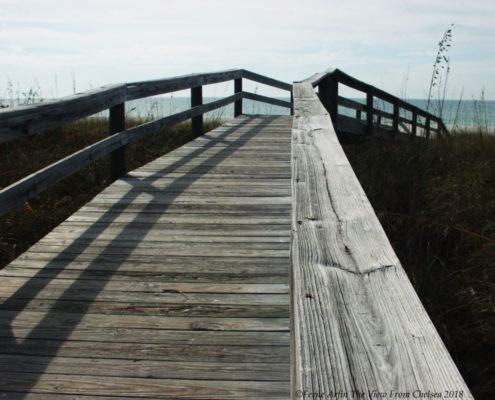 Little stucco cottages, bungalows and fantasy haciendas flashed hot pink, yellow and turquoise between the pale “McMansions” that are the new Florida vernacular. Pink plastic flamingos peeked from behind palm trees. The ghosts of an older, flashier Sarasota waited to burst out dancing, sequins scintillating, ribbons and feathers aquiver.

Summer home of “The Greatest Show on Earth”

In its heyday at the turn of the 20th century, the Ringling Brothers and Barnum and Bailey Circus toured America in a 100-car train carrying hundreds of animals. In winter the self-billed “Greatest Show on Earth” headed south to Sarasota, where the mild climate and grassy savannahs suited the performers and their (mainly) African menagerie equally well.

Circus folk spread across several of Sarasota’s seven keys and nearby barrier islands, eventually turning the area into the major dance, circus training and performance centre that it remains. Sarasota still has a resident circus and a training programme for schoolchildren; and throughout the year, most American and international circus companies do a Sarasota season.

Time for us to go in search of John Ringling, the larger-than-life impresario who started it all. We found him, in spirit at least, at the Ringling Museums, a three-attraction complex on 66 banyan-shaded acres. 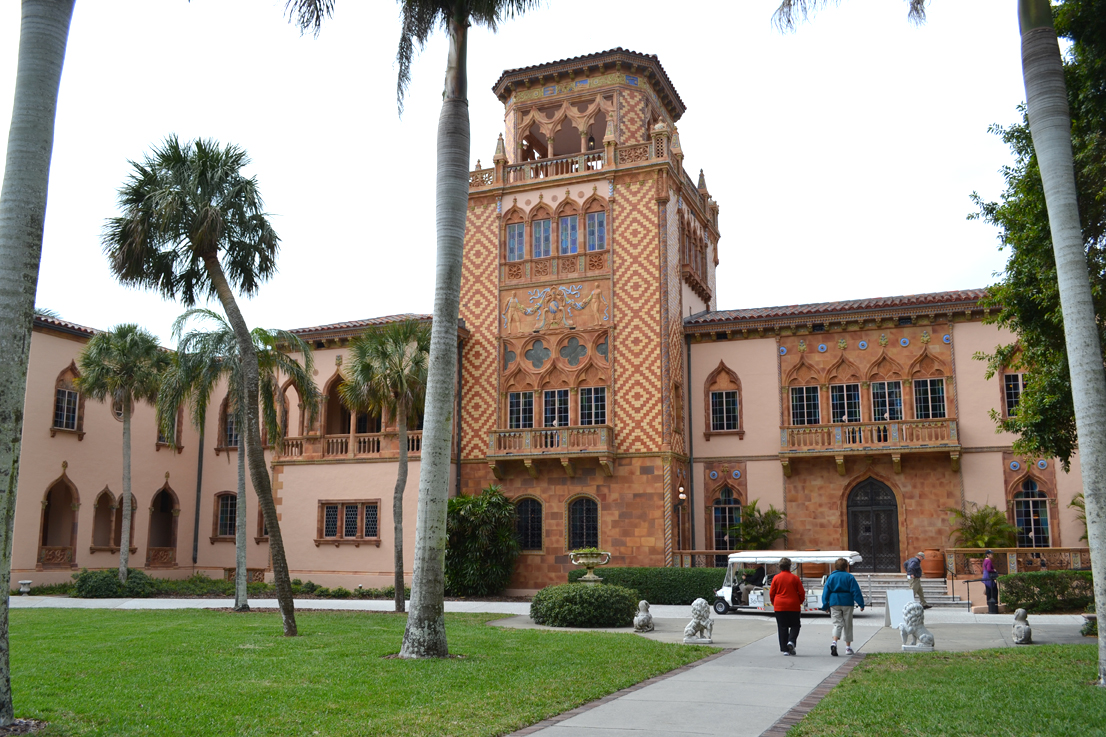 When I was a child, the Ringling Brothers and Barnum and Bailey Circus made me anxious. There was just too much to see all at once in its famous three rings; would I miss the best clowns in the first ring while I tried to decide between the dancing elephants or the man on the flying trapeze in the other two? The triumvirate of attractions that makes up the Ringling Museums can overwhelm in much the same way, so it’s probably a good idea to spread your visit over a few days.

To begin, we chose Ca d’Zan (“John’s House”), Ringling’s love letter to his bride. Married late in life, he was besotted with his wife, Mable . Between 1924 and 1929, he poured millions into building a magnificent house and an art museum for her. Ca d’Zan, a Venetian-Gothic-style palazzo meant to resemble the 14th-century Doge’s Palace, has the whole of Sarasota Bay as its Grand Canal.

Its gobsmacking luxury is matched by its outrageous theatricality. There’s an enormous bath carved from a single block of golden Siena marble, a set of baroque thrones that once belonged to the Gilded Age rail tycoon George Jay Gould, a huge crystal chandelier from the original Waldorf Astoria and a “tap room” brought in its entirety from a St Louis restaurant.

Many of the rooms have coffered ceilings made of local pecky cypress covered with pictures and elaborate decoration. I had to crane my neck to study Dancers of the Nations, the suite of pictures on the ballroom ceiling. They looked like the pictures on the fire curtain of a Broadway theatre. So I wasn’t surprised when I learnt later that they were painted by a Ziegfeld scene painter.

Alongside the house, Ringling built a museum – now the John and Mable Ringling Museum of Art – to house the works of Rubens, Titian, Tintoretto, Van Dyke, El Greco, Gainsborough, Reynolds, Velázquez, Veronese, Tiepolo and their contemporaries that he and Mabel bought. It’s a head-spinning collection, and I’m embarrassed to say that after a few galleries I felt poleaxed by fine art. 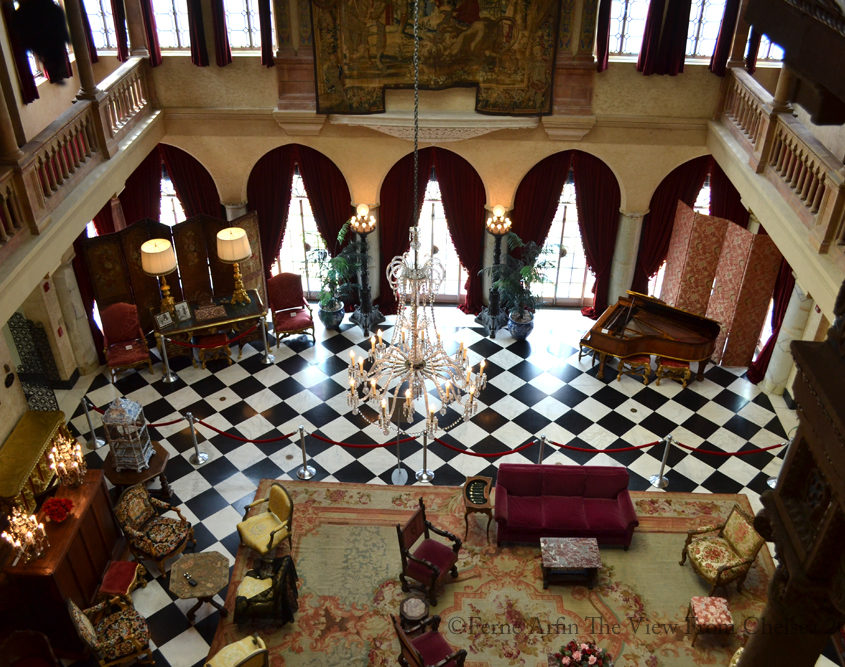 The Court at Ca d’Zan

The Circus Museum, the third attraction, was such a creative expression of another man’s obsession that it gave us just the lift we needed. The Howard Bros Circus Model is the world’s largest model of its kind. It took one man, Howard C Tibbals, 50 years to make the 42,000-piece model of the Ringling Circus circa 1928. From the arrival of the circus train through the set-up to the performance under the Big Top, every one of the 1,300 miniature performers, roustabouts and punters and the 800 animals has its own personality, wardrobe, props and even plates of food.

The detail is phenomenal. The model circus train has 55 cars, 850 feet of 3/4 inch scale rails, 7, 500 six-inch cross ties, 800 pounds of gravel and 32,000 hand made metal half-inch spikes! In the dining tent, where 3,900 meals were served to 1,300 people every day, the model has 140 tiny little bottles of ketchup, another 144 bottles of Worcestershire sauce. and every one seated at the long tables has his or her own meal.  The dressing tent has 104 trunks, 61 tiny bottles of nail polish, 73 sticks and 89 jars of makeup, 180 mirrors, even 41 rolls of toilet paper and 66 boxes of tissues. It really has to be seen to be believed, so have a look yourself, below. 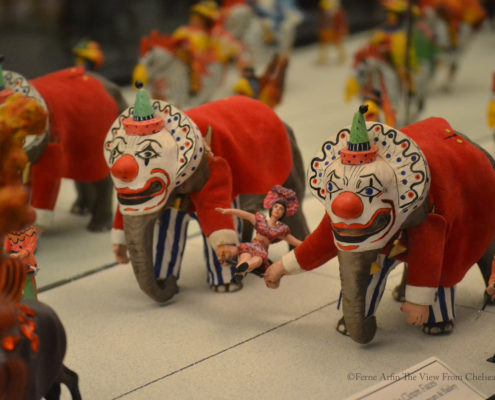 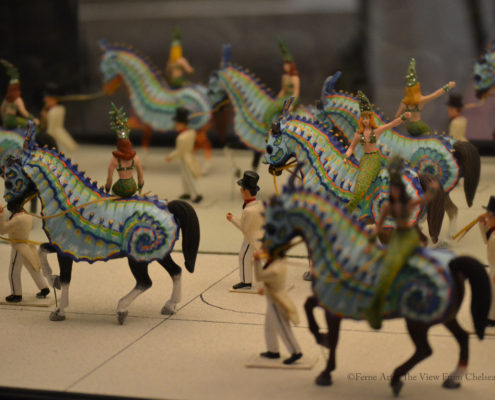 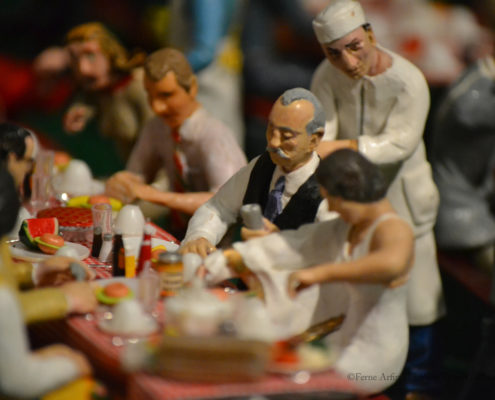 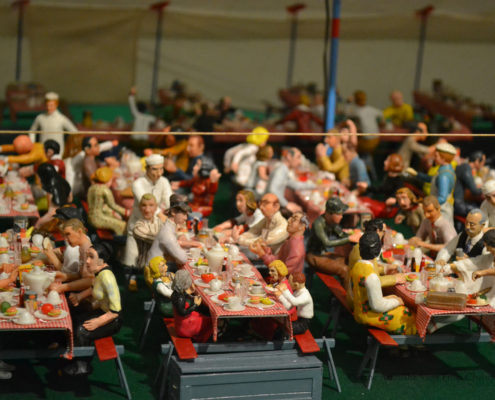 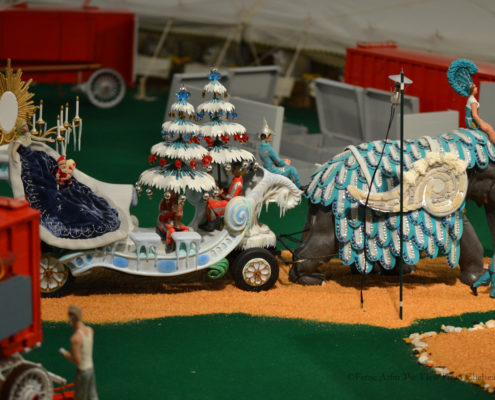 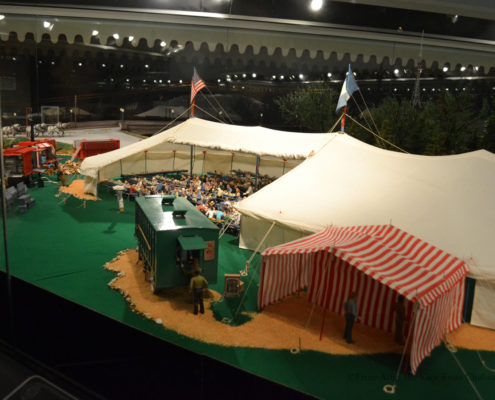 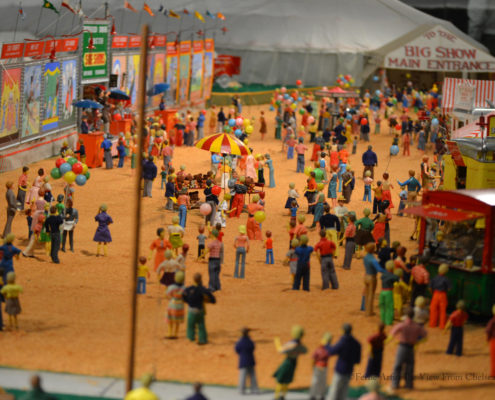 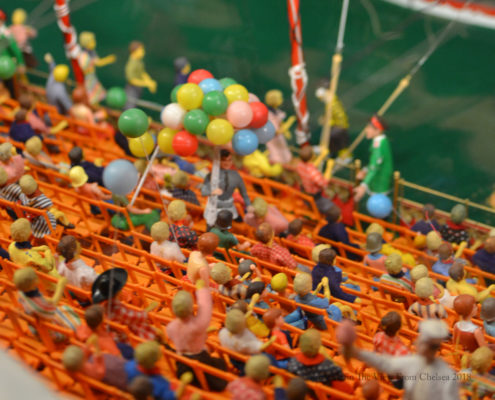 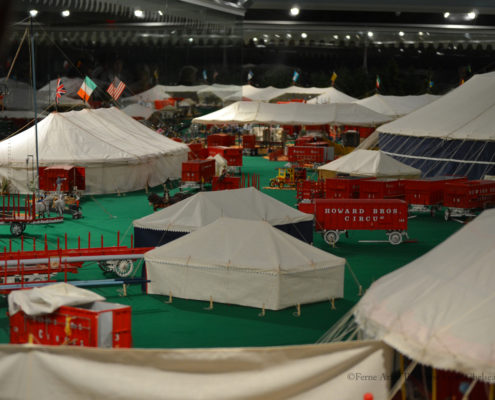 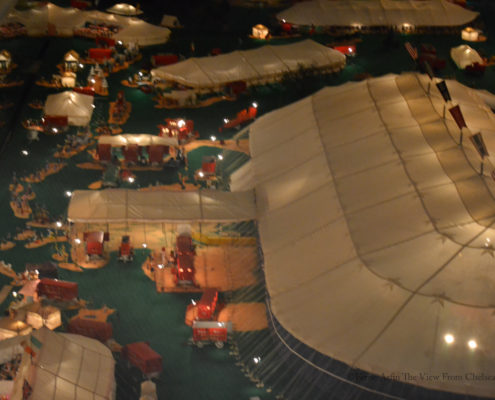 Tibbals, now in his early eighties, is still adding to it and donated more than $10.5 million for the building that houses it. Now, here’s the thing – I thought I didn’t really like the circus, but we spent several hours peering into the 3,800sq ft model and I couldn’t stop smiling the whole time.

To find out more about visiting The Ringling in Sarasota, Florida – which also has a theatre, exhibition spaces and several restaurants and cafes – visit the website.

While you’re in Sarasota, check out this little city’s terrific foodie scene with a 3-hour Downtown Sarasota Food Tour or a lunch tour of lovely St Armand’s Circle.