The secret world of the Chelsea Physic Garden

Within five minutes of entering the Chelsea Physic Garden, I was amazed by the history and miraculous, secret powers of plants. An hour later, after a free guided tour, my head was exploding. 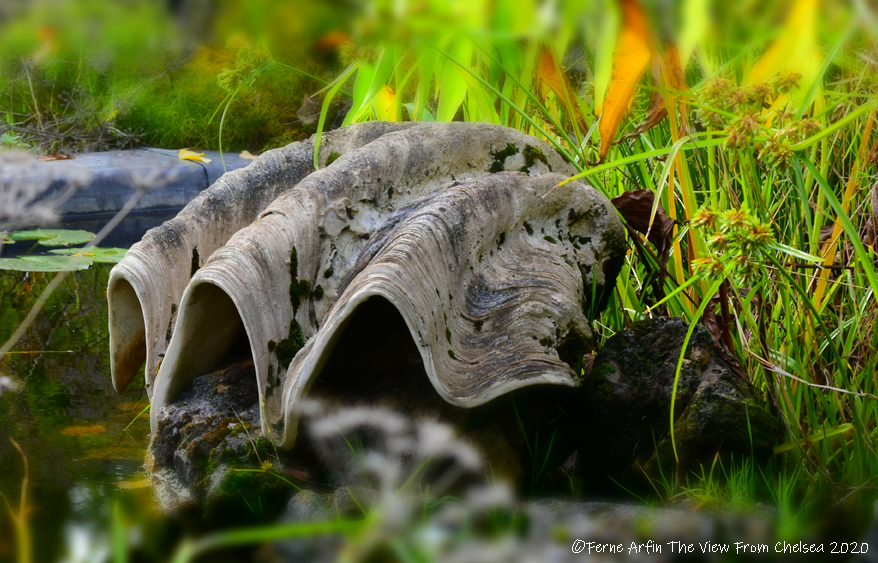 Did you know that if you rub banana skins on age spots and freckles you can make them almost vanish? Or that sunflowers pull radioactive strontium out of the soil and can harvest gold?Me neither. But I learned that and a lot more at the Chelsea Physic Garden, London’s oldest botanic garden in an almost hidden corner of Chelsea.

Like a lot of Londoners, I’d heard about the Chelsea Physic Garden but never managed to visit it.  Until relatively recently, the garden founded by the Society of Apothecaries in 1673, was only open to the public for a few hours, twice a week. It never seemed to be open when I got the impulse to visit.

These days, between April 1 and October 30, it’s open every day. And this year, it’s even open to visitors right through London’s lockdown, ending 2 December. Finding it, though, is no easy matter. You’d think four acres of gardens and open space would be hard to hide among the mansion blocks full of smart flats along the Chelsea Embankment. But, a high brick wall separates the Thames-side Chelsea Physic Garden from Royal Hospital Road, several hundred yards west of The Chelsea Royal Hospital (famous for the red uniforms of the military retirees, the Chelsea pensioners, who live there). That and the fact that the entrance is nowhere near the published address means the place is pretty well camouflaged.

Nevertheless, 50,000 visitors manage to find their way to the unobtrusive entrance on Swan Walk every year. That may be small change compared to more than a million who visit the nearby Saatchi Gallery annually but clearly this garden is worth the search.  A stained glass window dedicated to one of the garden’s luminaries that I saw on a visit to Benedict Arnold’s grave inspired me to look for it. The window honours William Curtis, an 18th-century botanist whose book, Flora Londonensis, was the definitive guide of the day to all the known plants native to London. Curtis was Praefectus Horti (demonstrator of plants) at the Chelsea Physic Garden in the 1770s. Curious, I plugged in my SatNav, and set out to find it – only to discover it has been virtually under my nose for years.

London’s oldest botanic garden maintains and cultivates a living collection of more than 5,000 edible, medicinal and useful plants. As 350-year-old walled gardens go, this one is not what you’d expect. There’s no neat, formal knot garden with manicured beds of scented herbs, no espaliered fruit trees along the walls, no crowds of blowsy old roses. Instead, it’s actually a bit of a mess. That’s the charm of this wild-looking landscape with plants organized according to their geographic and cultural origins; their traditional roles in medicine, science and myth, and their uses, past, present and future.  The free guided tour of the garden and all its remarkable plants is a consciousness-expanding experience.

History of the Chelsea Physic Garden

The Worshipful Society of Apothecaries of London founded the garden in 1673 to grow medicinal plants and to train apprentices in their identification and use. The Society, which still exists, managed the garden until 1899. Today it is managed as a charity and still has a role in education and in maintaining a collection of rare medicinal plants for study, research and sharing with other institutions. 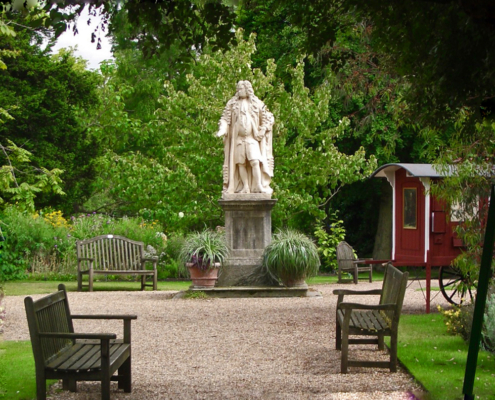 Sir Hans Sloane, Lord of the Manor of Chelsea, benefactor of the Chelsea Physic Garden, the British Museum and the Natural Science Museum and inventor of milk chocolate! Photo by bixentro, Creative Commons

The garden’s history is studded with colourful, noteworthy characters and important discoveries. It owes its very existence to Sir Hans Sloane, a true man of the Enlightenment who served as physician to two kings and a queen. He was president of The Royal Society, a philanthropist and an inveterate collector whose collections formed the foundation of the British Museum, the Natural Science Museum and parts of the British Library.

From humble beginnings to a chocolate fortune

As a young Irish student from Killyleagh, he apprenticed at the Chelsea Physic Garden. Years later, after he made his fortune with such remedies as chocolate milk (yes, read on) and quinine and after purchasing Lordship of the Manor of Chelsea, he agreed to lease the four acres of the garden in perpetuity to the apothecaries for a peppercorn rent of £5 a year. They were also required to provide 50 pressed specimens of newly discovered plants a year until the total reached 2,000. The total very soon exceeded that number. The charity that runs the garden still pays £5 a year to the Cadogan Estate, landlords descended from Sloane’s married daughter.

Another benefactor was the 18th-century explorer and naturalist Joseph Banks. Banks accompanied Captain James Cook on the first voyage of the Endeavour and brought back thousands of plants from South America, Tahiti and New Zealand. As advisor to King George III, he turned Kew Gardens into the leading botanical garden in the world. Two giant clams, one pictured in the Rockery Pond at the top of this post, returned with Banks from Tahiti. He subsequently led the first British scientific voyage to Iceland, bringing back the black volcanic basalt that surrounds that same rockery pond as ballast.

The Rockery Pond, by the way, is thought to be the oldest rock garden in Europe and is a Grade II listed historic monument. If you examine it closely you’ll find chunks of fused bricks from a Chelsea brick kiln and bits of carved masonry from the Tower of London included in its structure.

For Black History Month, a little-told but important story

In 1687, Sir Hans Sloane sailed to Jamaica as physician to the new governor, the Duke of Albemarle. It was a short posting, of only two years, because the duke was fond of high living, ignored his doctor’s advice and died 15 months later. But during his time there, Sloane made numerous observations of plants and local remedies.

It’s commonly reported that Sloane observed local women using a mixture of chocolate and milk to treat stomach ailments and fussy babies. He added sugar to make the remedy more palatable and later made part of his fortune selling the recipe to Cadbury Chocolate. He also collected and brought back quantities of cinchona bark, the source of quinine, used to prevent and treat malaria.

What is rarely mentioned is that Sloane’s visit to Jamaica coincided with the beginnings of the slave trade there. And the “local people”, both men and women, who showed Sloane how to use these materials, where to find them and how to grow them were almost certainly enslaved people. As October is Black History Month in the UK, it seems important to recognize this overdue historic debt.

And it’s also important to recognize another source of Sloane’s fortune. In 1695, back in London, Sloane married the widow of sugar plantation owner Fulke Rose. Rose was an early settler of Jamaica and one of its most important slave buyers. By marrying his widow Sloane was further enriched with a third of the slave-produced sugar income.

A British Museum special podcast tells the story. Listen to it here.

Find out more about The Secret Cures of Slaves: People, Plants and Medicine in the 18th-Century Atlantic World.

What to see at the Chelsea Physic Garden 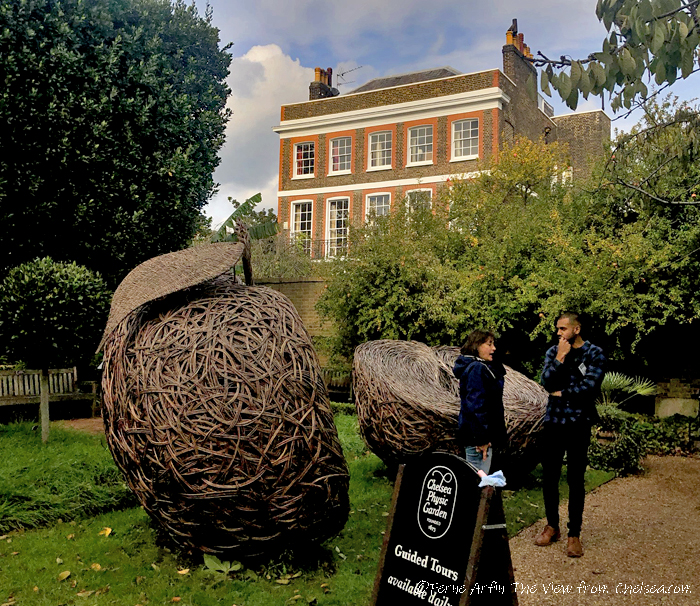 An Apple a Day was created by willow weaving artist Tom Hare, as part of ‘Food Is Medicine’ exhibition in 2019 celebrating the power of plants and food as medicine to help support well-being and health. The giant willow apples still greet visitors at the entrance to the garden in 2020.

The best way to visit the garden is to take a free guided tour. The tours, led by knowledgeable volunteers, are offered several times a day. Among the areas that I found most interesting were:

There are also historic gardens, a fernery, a woodland garden, the largest fruit producing olive tree in Britain and several historic greenhouses. And to top off your visit, a rather pleasant cafe serves hot and cold dishes, drinks and lovely cakes.

How to visit the Chelsea Physic Garden

First off, ignore the Royal Hospital Road address published on the website. That’s the exit. The entrance to the garden is an opening in the wall around the corner. And these are the facts:

During the COVID19 Crisis 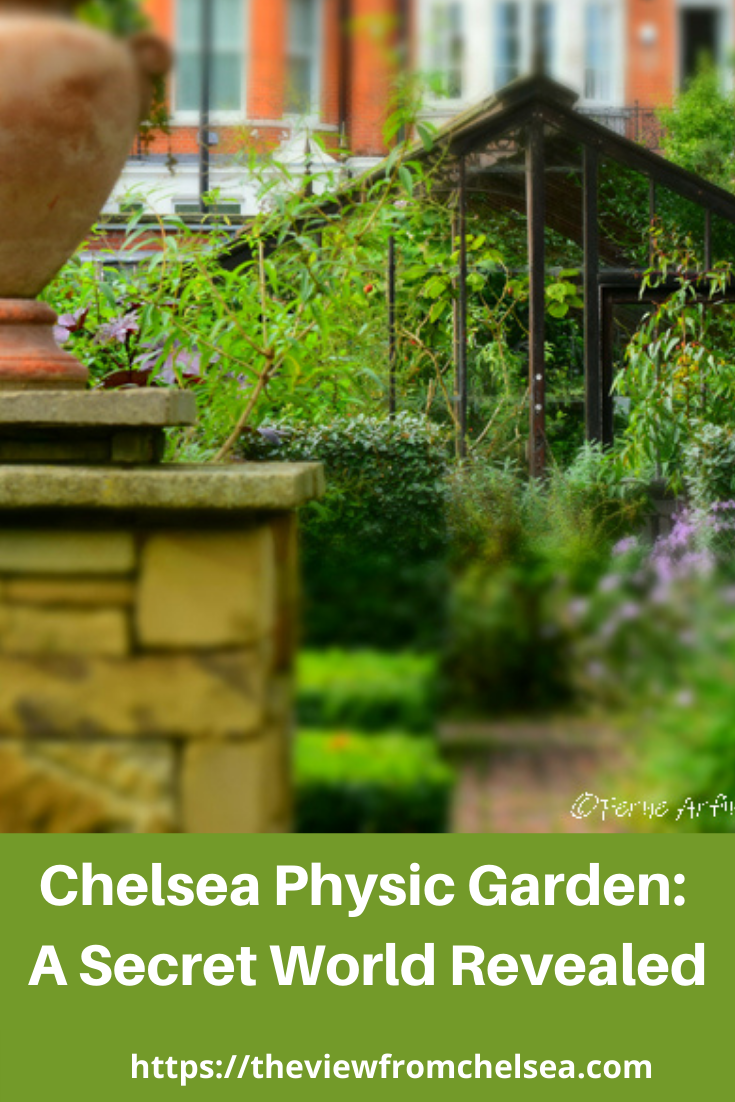 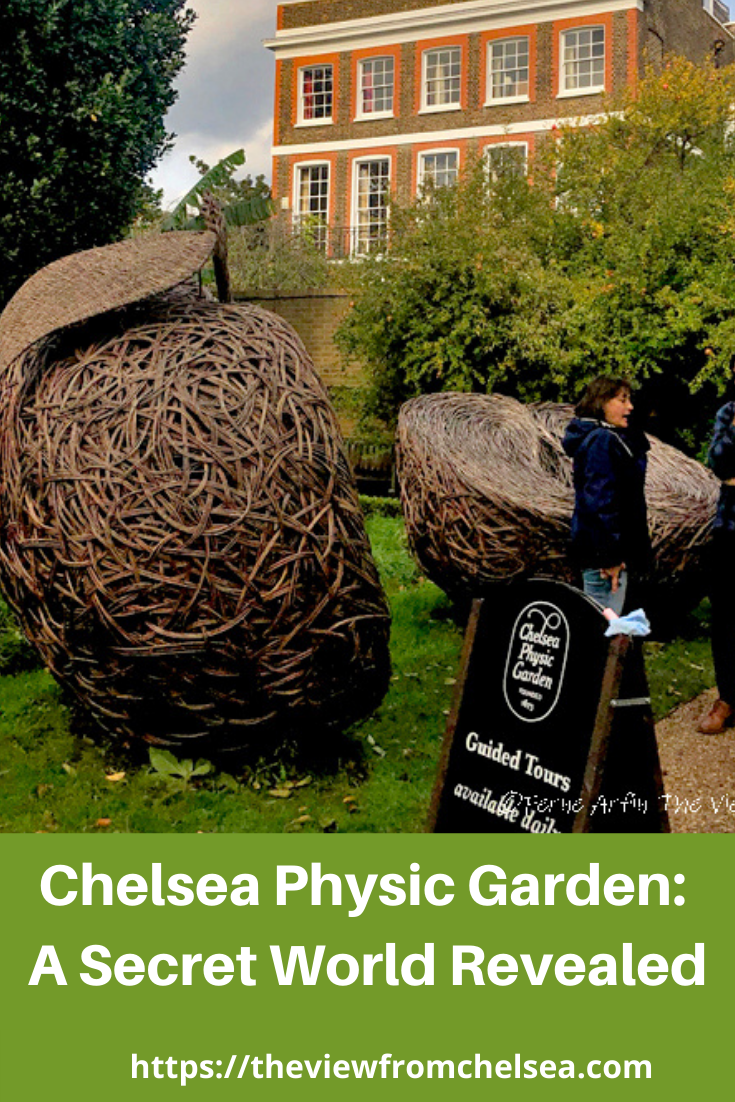 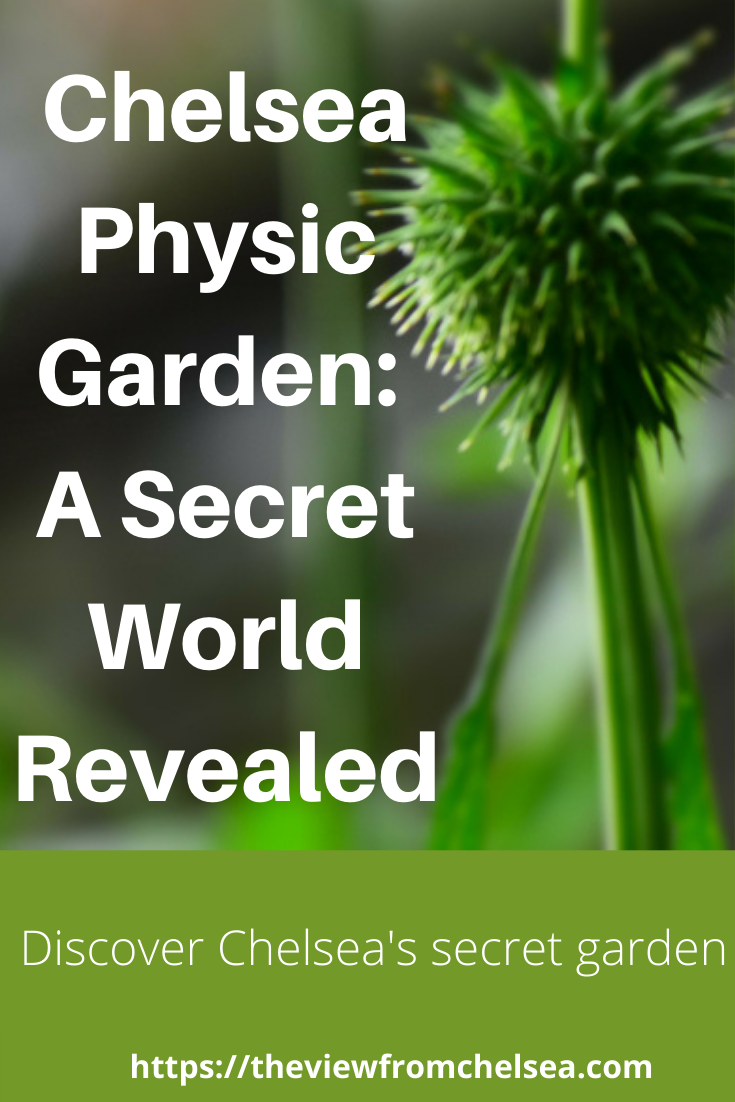 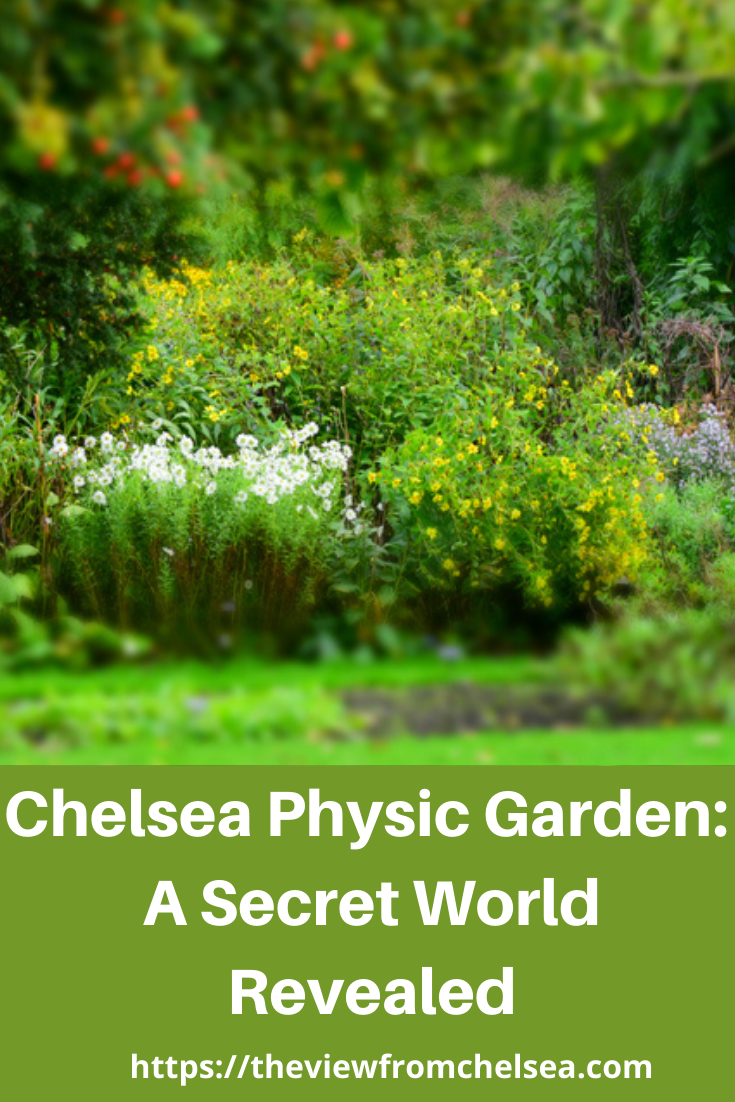 How to visit London after lockdown