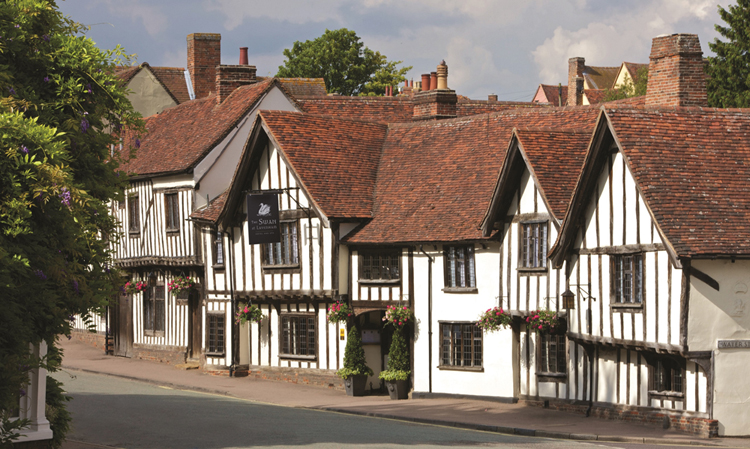 Hotel Review: The Swan at Lavenham

What can you say about staying in a place so iconic that everyone who sees a picture of it swears they’ve seen it before? They probably have. The black and white, half-timbered facade of the Swan at Lavenham has posed for so many guidebook covers, calendar pages and websites that it is almost as familiar an image of “Ye Olde England” as Big Ben. Some of the furnishings may be a little bit worn and here and there the floors creak when you walk over them but this place has been welcoming guests almost 400 years – why quibble over details?

Haven’t I seen you somewhere before?

Maybe. The genuinely medieval facade of The Swan:

The Swan is the quintessential Medieval English coaching inn, so even if you think you’ve never seen it before, you’ve probably absorbed enough of an idea of it through osmosis to feel a surge of deja vu when you drive up to it on Lavenham High Street.

History of the Swan

Three medieval houses were joined to form the inn. No one is quite sure when but there are records of the place being well established as a hostelry as early as 1667. The houses themselves are recorded as early as 1425 but evidence of workmanship dating from a century earlier have been found.

The Wool Hall, which was linked to the Swan in the 1960s, includes a large beamed function room at one end of the hotel that was once the Guildhall of the medieval Guild of Our Lady, one of the guilds that controlled the cloth industry in Lavenham’s 14th and 15th century heyday. 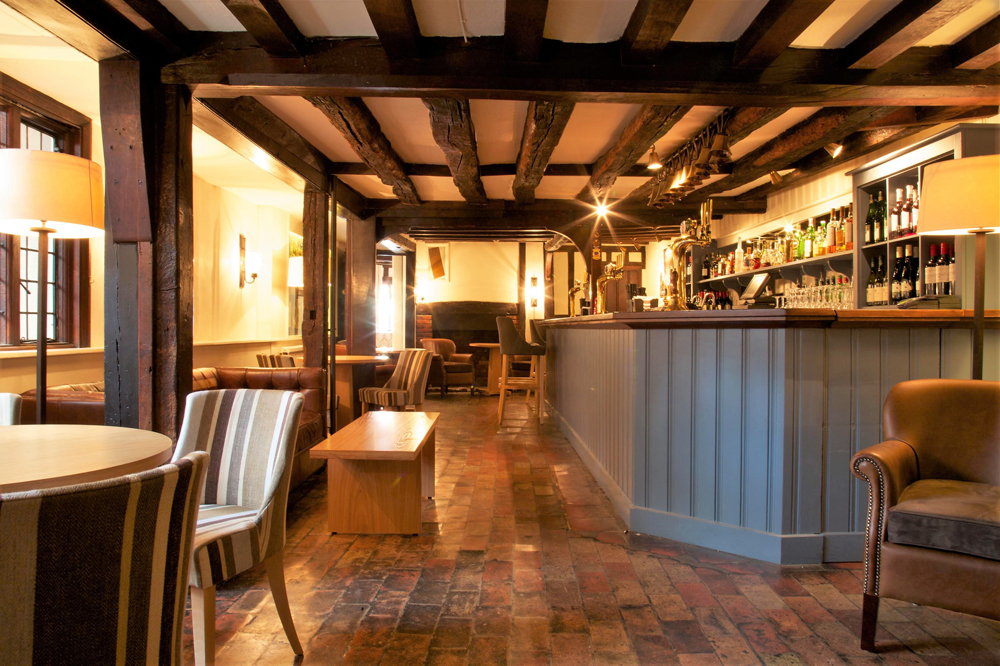 The Airmen’s bar of The Swan at Lavenham

More recent history is preserved in the hotel’s Airmen’s Bar, so named in honor of the US airmen stationed nearby in World War II. RAF Lavenham, no longer active, was used by the US Army Airforce’s Eighth Air Force from April 1944. The bar is decorated with memorabilia from those days and, if you look around carefully, you may find a WWII airman’s initials carved into the bar or woodwork here and there.

Some say that bandleader Glenn Miller had his last drink here before taking off for France on his fatal flight, December 15, 1944. Since his last concert was in Bedfordshire and he took off from an airport there, some distance away, this seems unlikely. But it would not be surprising if Miller, who played many concerts in East Anglia, bent his elbow at this bar. USAFE military personnel currently stationed at RAF Lakenheath and RAF Mildenhall, both about 30 miles away, might want to drop by to soak up some Anglo/American history.

Staying at the Swan

The Swan at Lavenham has 45 individually appointed rooms and, as you might expect given the building’s history, each is unique. Do pay attention when you are guided to your room or you may never find your way again. The route to mine led along corridors with polished stone or brick floors, around the main restaurant, around a courtyard that once stabled horses and is now a lovely garden, up a short flight of stairs, down another, up yet another.

Don’t worry if you or a member of your party has mobility issues. There are several accessible rooms near the front of the hotel on the ground floor. Just make sure you mention that when you book. And more good news: these days the Swan is dog friendly.

Some standard rooms are small, others – because of the contours of the inn – are surprisingly spacious. Most display a bit of the half-timbering that’s part of the Swan’s structure. Standard rooms are equipped with comfortable contemporary furniture and bedding. Superior doubles, and junior suites are spacious and have a modern feeling. Feature rooms are full of original Tudor details – beams, leaded glass, vaulted ceilings, tilted floors – and there are several rooms with oaken four-poster beds. 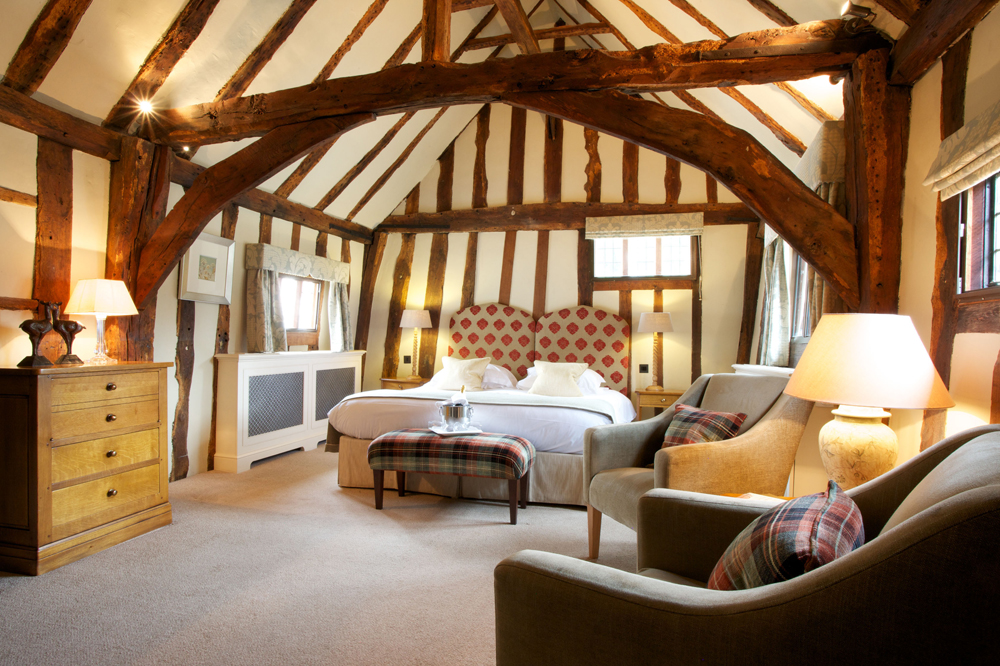 The Stanstead Suite, room 52 at the Swan at Lavenham Hotel and Spa.

My feature room, similar to the one pictured above and entered via a narrow corridor, had a dramatic vaulted and beamed ceiling and two leaded windows – one overlooking Lady Street (one of Lavenham’s best preserved medieval streets) and the other looking out onto Water Street, a main approach to the village. The room was equipped with dressing table, an armoire/cupboard of rough-hewn oak that could have been antique, and a chest of drawers where the coffee and tea making things were hidden away. Flat screen television, a hair dryer and free wi-fi are among the modern conveniences cleverly provided in this essentially ancient room.

The bathroom, with a shower over the bathtub, had everything you need, including a fluffy robe and luxury toiletries. It look a bit like it was due for a refresh, and the step up could be a problem if you’ve had a skinful in the bar before retiring. But these are unimportant quibbles when you consider that staying in such gobsmackingly authentic medieval digs is a once in a lifetime experience. And the luxury Temple Spa toiletries from the Swan’s new Weavers’ House Spa and a lovely treat.

There are several stories about Room 15, said to be haunted by a pregnant housekeeper, spurned at the altar in the 19th century, who committed suicide. I didn’t meet her. But passing the open door of the Wool Hall – a massive, dark, half-timbered space – on the way to my room, was a little spooky.

Dining at the Swan

There are several choices for dining at the Swan. A light informal menu is available in the Brasserie, overlooking the hotel’s secluded garden and they’ve recently added a selection of healthy options salads that your personal trainer would approve of (crunchy kale, brussels sprout shavings).
The brasserie menu is also available in the Airmen’s Bar.

I sampled dinner in The Gallery, the hotel’s fine dining restaurant, housed in a high, vaulted medieval hall with a beamed ceiling, a minstrels gallery and an ancient hearth discovered during renovations. A formal afternoon tea is also served in the Gallery. 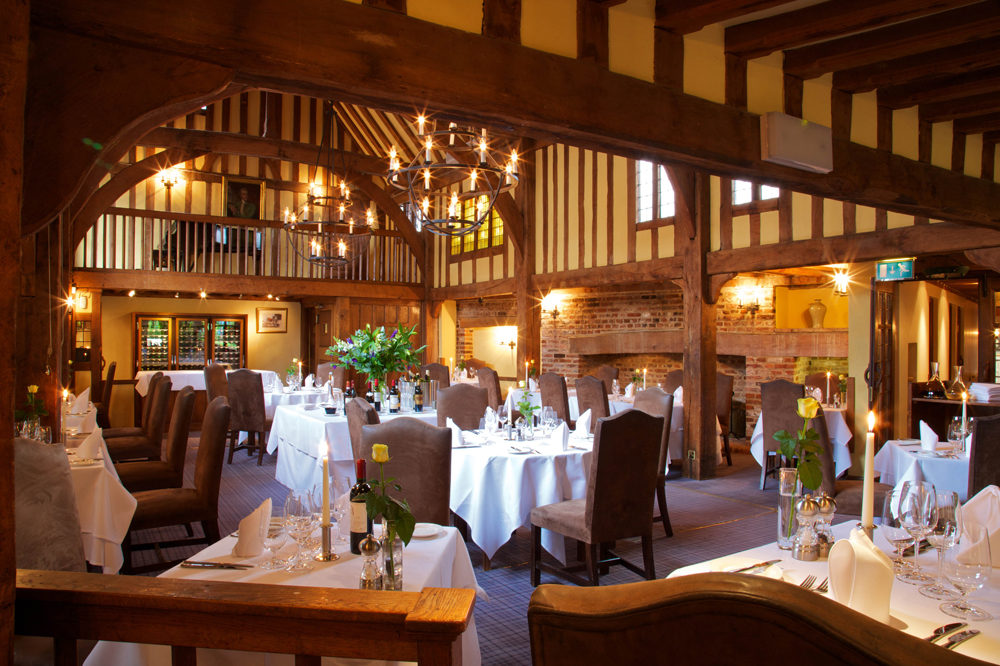 The Gallery Restaurant at the Swan at Lavenham.

The Gallery offers a seasonal fixed price menu of three courses for £40 up to five courses for £60 (April 2019 prices) and a very impressive wine list.

The menu changes frequently so anything I report here will probably have changed by the time you visit. But, to give you a sense of style, starters on the evening of my visit included roast hake, truffled goat’s cheese with pickled beets (those who read my columns regularly will know how much I hope the fad of combining goat cheese with beets will fade into memory very soon), confit pork cheek, parsley and spinach panna cotta or smoked salmon roulade. Mains included Suffolk lamb served several different ways, cod with lentils, chicken with pearl barley, halibut, and a vegetarian choice. Desserts included a very tempting dish called “Textures of Apple” – which was made up of aromatic tea poached apple, apple and parsley puree, caramel apple mille-feuille, apple and forest berry foam. There was also a peanut butter mousse accompanied by apple and celery salad, apple sorbet and celery seed sugar tuile.

Guests who book a dinner, bed and breakfast package are offered a less ambitious but nevertheless tempting house menu. Given a choice of either, I opted for the simple house menu, starting with a fresh and beautifully dressed Greek salad that included tiny cubes of feta and a multi-colored assortment of heritage tomatoes. My main, pork belly with dauphinoise potato and apple puree, was a perfect exemplar of this dish – meltingly tender and sinfully unctuous pork with the kind of crispy crackling that can only be achieved when this dish is confit. The thinly sliced dauphinoise potato seemed to be a cross between the classic dish and a fondant potato – melting and savory. I could have used a bit more of the apple puree to cut the richness of the dish, but otherwise, no complaints.

After a meal of such intense flavors, I decided it would be wise to skip dessert and finish with a freshly brewed coffee.

The Spa at the Swan

In 2015 The Swan at Lavenham added a purpose-built spa with six treatment rooms (including a couples room), sauna, steam room, outdoor heated vitality pool (similar to a jacuzzi heated to a toasty 39 degrees all year around), a private terrace and a full menu of spa treatments. Hotel guests have complimentary use of the sauna, relaxation suites and pool and are urged to schedule their spa time in advance as this award winning 5 Bubble Spa is extremely popular. The Weavers’ House Spa can be accessed internally via the hotel (through the rabbit warren hallways), alternatively through the garden of the hotel and also by its own entrance straight off the High Street. 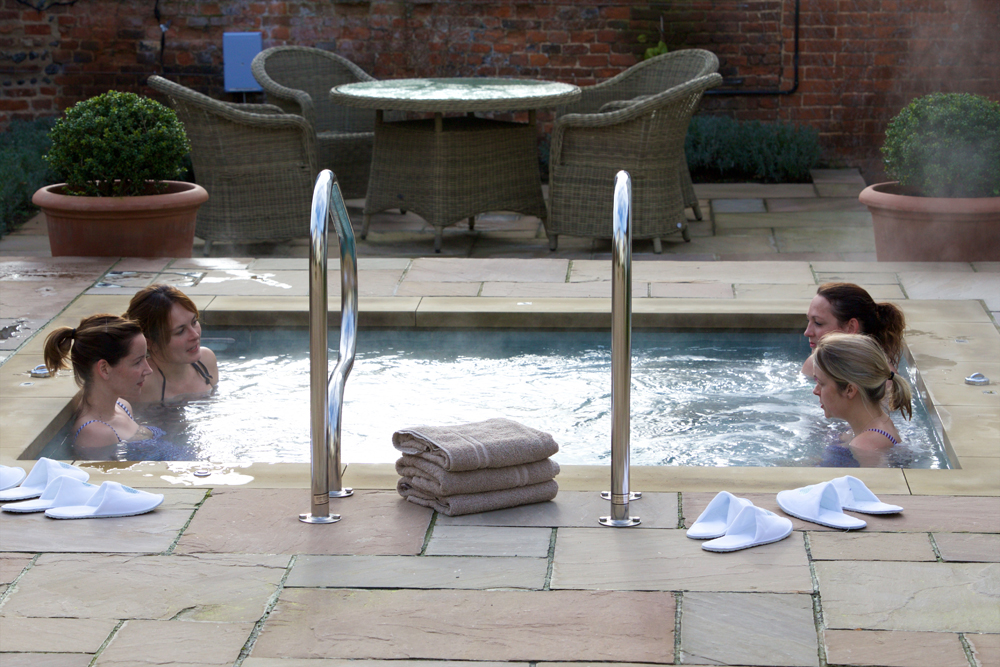 “Vitality” pool at the Swan at Lavenham Hotel and Spa

See what other travelers think and book this hotel on TripAdvisor

Where to stay in Suffolk, England: The Hotel Brudenell

Courtesy of the Hotel Brudenell