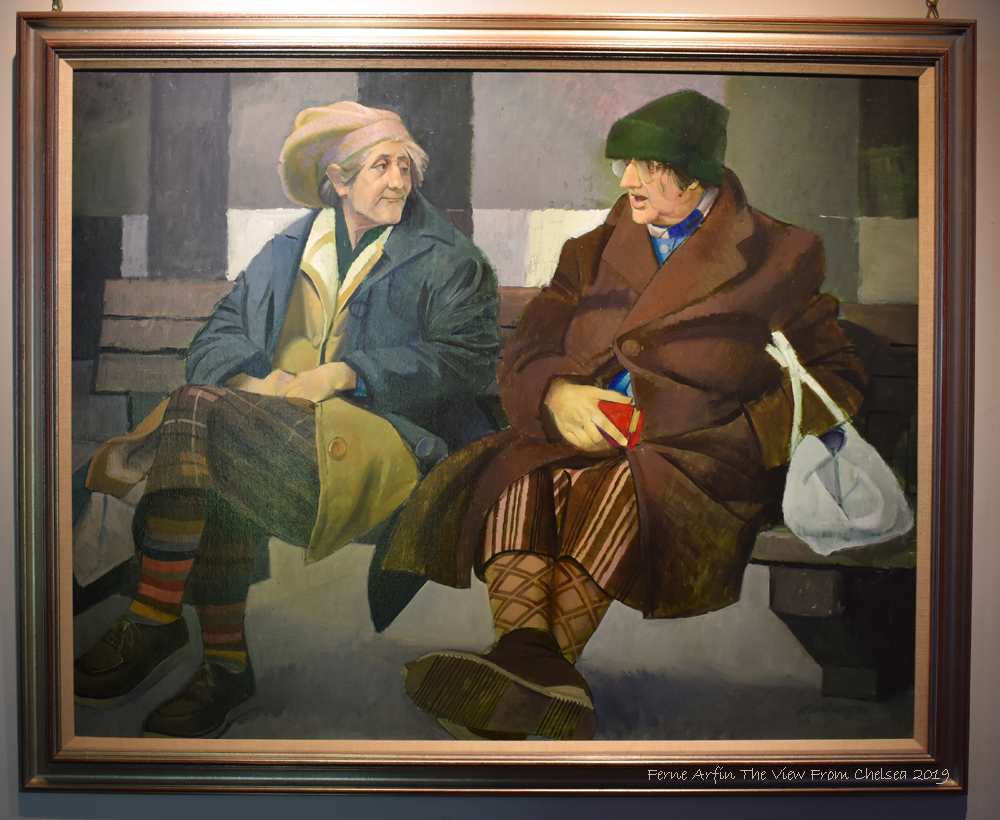 I went to Dundee to see the new Victoria and Albert Museum and to learn what a UNESCO City of Design was all about. I saw and I learned – and more about that in future posts. But what really blew me away was how many stories this small, friendly, easy-going city has to tell and how many hidden gems are just waiting to be discovered by visitors. The painting above (and the small gallery that houses it – The McManus Dundee) is a case in point.

Following the COVID-19 lockdown, the McManus Museum and Art Gallery in Dundee is set to reopen on August 20, 2020, with safety measures in place to protect both staff and public. Keep up to date on their website.

Susan Keracher, fine art curator at the McManus Art Gallery and Museum, was bursting with enthusiasm when she introduced me to her galleries. And with good reason; the Scottish and international collections at the McManus are impressive, and impressively shown. But it was in the Long Gallery, currently exhibiting a collection of studio pottery, that I came upon this painting, “Two Auld Wifies, Dundee”, all by itself near an exit, and was intrigued by its unexpected story. It’s not what you might, at first, imagine. but you’ll have to read on to discover why.  First, a bit about the museum.

About The McManus Dundee 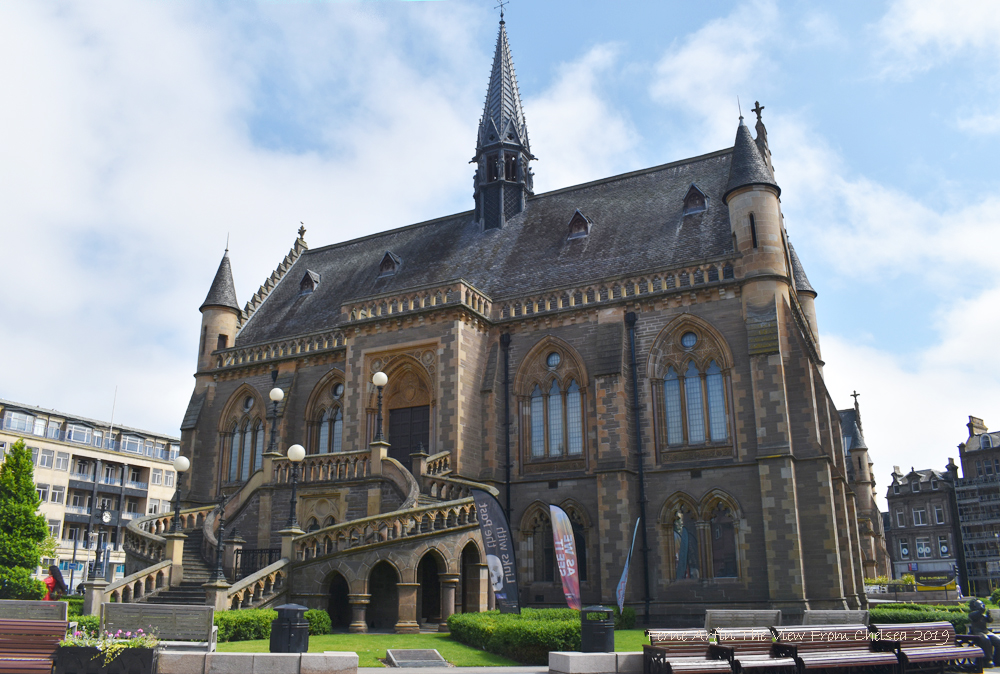 Opened in 1869 as The Albert Institute, the McManus was originally commissioned as a memorial to Prince Albert, Queen Victoria’s consort. It was designed by Sir George Gilbert Scott in the neo Gothic style he also employed in his designs for The Albert Memorial in Kensington Gardens and the London’s St Pancras Hotel. In 2005 the museum was closed for refurbishment and reopened in 2010 in its current form after undergoing a nearly £8 million redevelopment.

What to see at the McManus Dundee

The McManus today includes eight gallery spaces. As you’d expect in a small city museum, there are galleries devoted to local history and natural history. A gallery of international objects, enriched by Dundee’s 19th century role as one of the world’s leading whaling ports as well as its position in the manufacture and trade of specialist textiles, is arranged in a magnificent hall illuminated through stained glass. Here museum curators have cleverly organized engaging narratives from what could have easily become cases full of random artifacts.

The McManus aims to have something for everyone but what most captured my interest were the two fine art galleries.

Art galleries at the McManus

The refurbished Victoria Gallery is designed to resemble a true Victorian gallery of the mid 19th century with its curved red walls, vaulted glass ceiling and densely hung paintings. 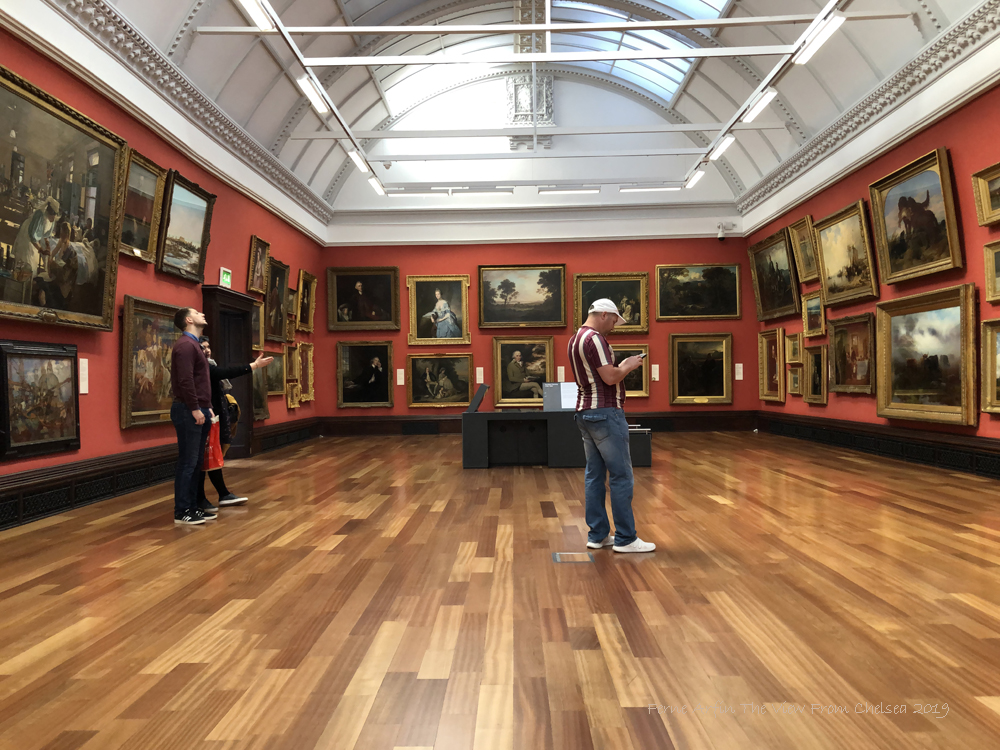 The Victorian Gallery – The floor to ceiling curve of the walls is not a camera flaw or optical illusion but was purpose designed to echo the Victorian practice, allowing visitors a better view of paintings hung higher up.

It’s collection highlights British and Irish painting between 1750 and 1940. Among my favorites:

The next galleries feature exhibitions of contemporary art and visiting exhibitions. The exhibition 20th Century Gallery, is taken from the McManus’s own collection and changes annually. Beyond this, an area of temporary exhibitions features more experimental work.

Having just spent most of a day exploring the historic Antarctic research vessel RRS Discovery and learning about Scott and Shackleton (more about this coming soon), I was especially drawn to Glasgow-born artist James Morrison’s painting of an iceberg in the Canadian Arctic, below. 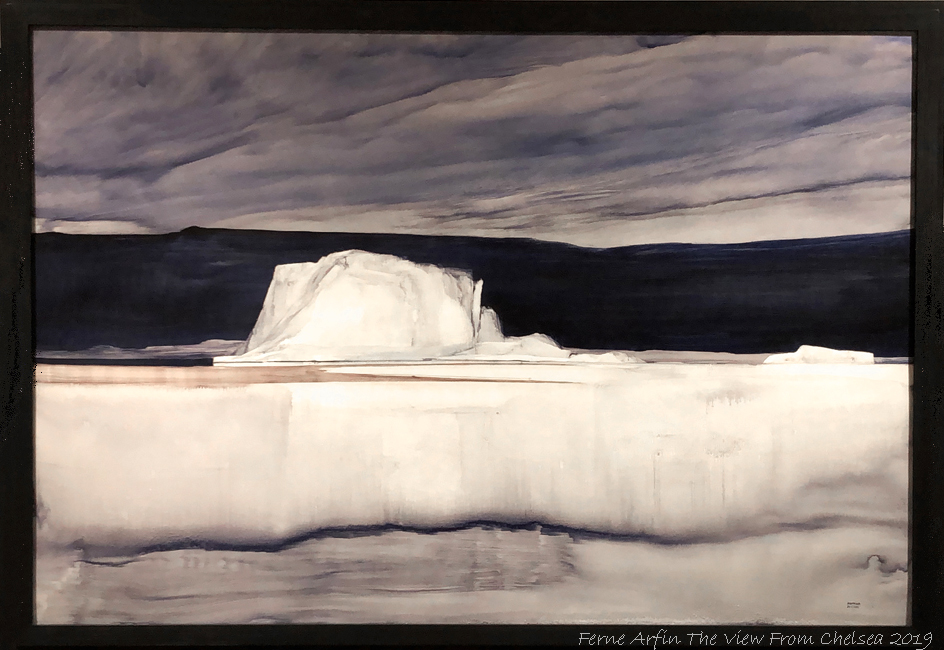 Berg, Otto Fiord by James Morrison. This painting was completed in the artist’s studio after his travels in the Canadian Arctic. The artist is noted for using oil paint like watercolor, painting with thin, liquid oils on non-absorbent panels. 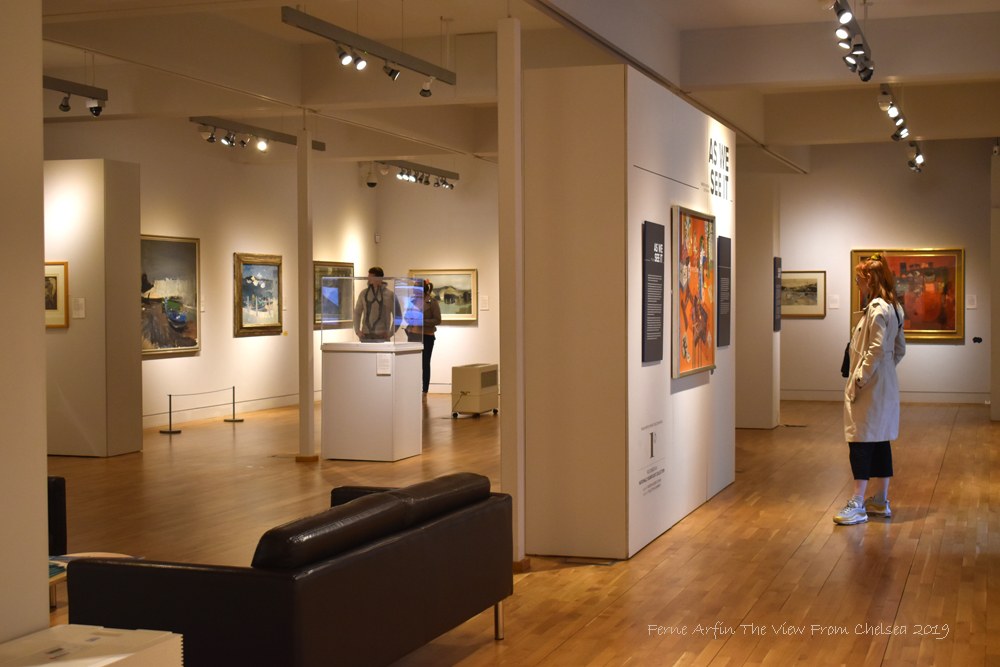 20th century galleries at the McManus feature an annually changing selection of work from the gallery’s permanent collections.

Throughout the galleries, captions and descriptions of the paintings are interesting and informative but not off-putting. Curator Susan Keracher explained, “We don’t use ‘isms’ or ‘school of’ in our captions, deliberately. And we don’t spend a lot of space describing the artist’s influences, for example.” The result is enough to satisfy the viewer’s curiosity without overwhelming with academic detail. It makes for a relaxing gallery experience and visitors who want to know more can read the catalog left around the galleries.

About the Two Auld Wifies at the McManus Dundee

And now back to the beginning of this piece. It was the picture featured at the start of this story that inspired me to write about the McManus ahead of all the other wonderful things to do and see in Dundee (stories about all that coming along soon). The picture, by the late New Zealand-born artist Ron Stenberg, had such a touching and surprising story connected to it. It’s not in any of the main galleries, but is tucked into a niche beside one of the education rooms off the Long Gallery. The artist donated it to the McManus in 1982. After it was given to the gallery, an appeal went out to discover the identity of the two Dundee people in the twin portrait. The woman on the left was quickly recognized as a local woman Mrs. Janet Isles-Denny. But contrary to initial appearances, she was not sitting on a bench gossiping with a woman friend, but was actually on a day out with her son, Alexander, a longtime resident of Dundee’s Royal Liff Hospital, a since-closed residential mental health institution. And, in a final twist, when he painted her portrait, the artist assumed the woman was an ordinary housewife from one of the less well-off districts of Dundee. In fact, she was one of Dundee’s wealthiest citizens. She outlived her son and died at the age of 101, leaving a significant fortune to a trust that produces about £100,000 a year in grants for the arts and the needy of Dundee.

While visiting Dundee, I was the guest of Dundee One City Many Discoveries 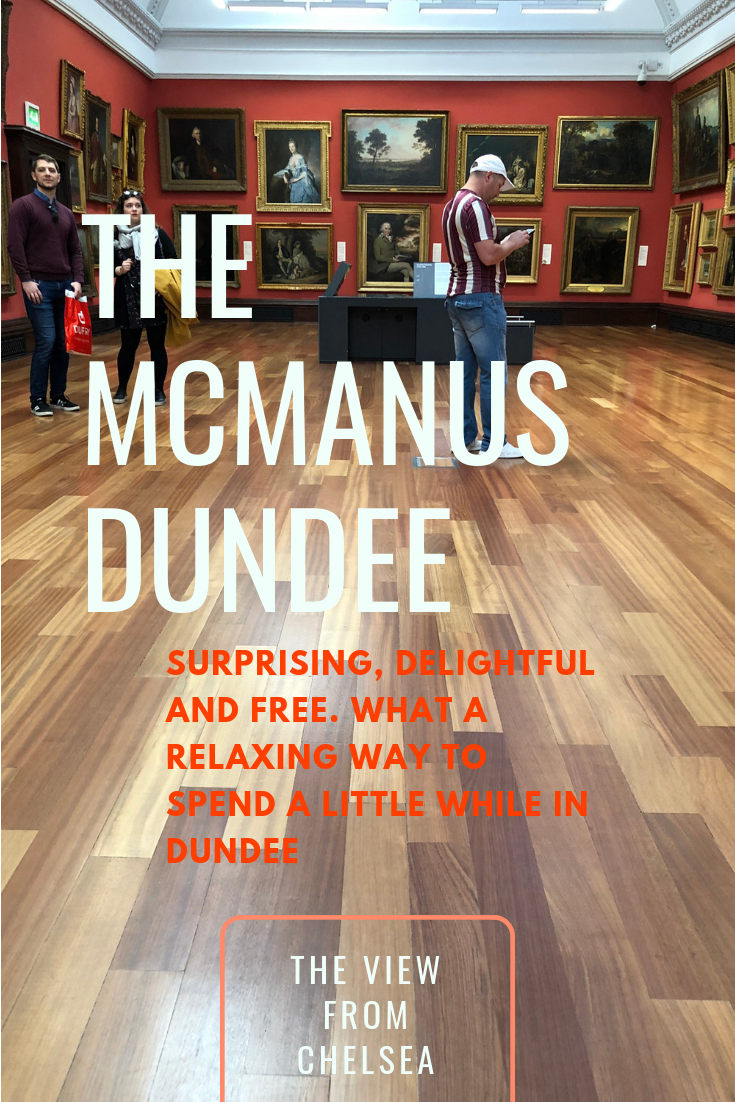 Where to Stay in Suffolk England: The Swan at Lavenham

Courtesy of the owner