Stay in a London time machine – The Pilot in Greenwich 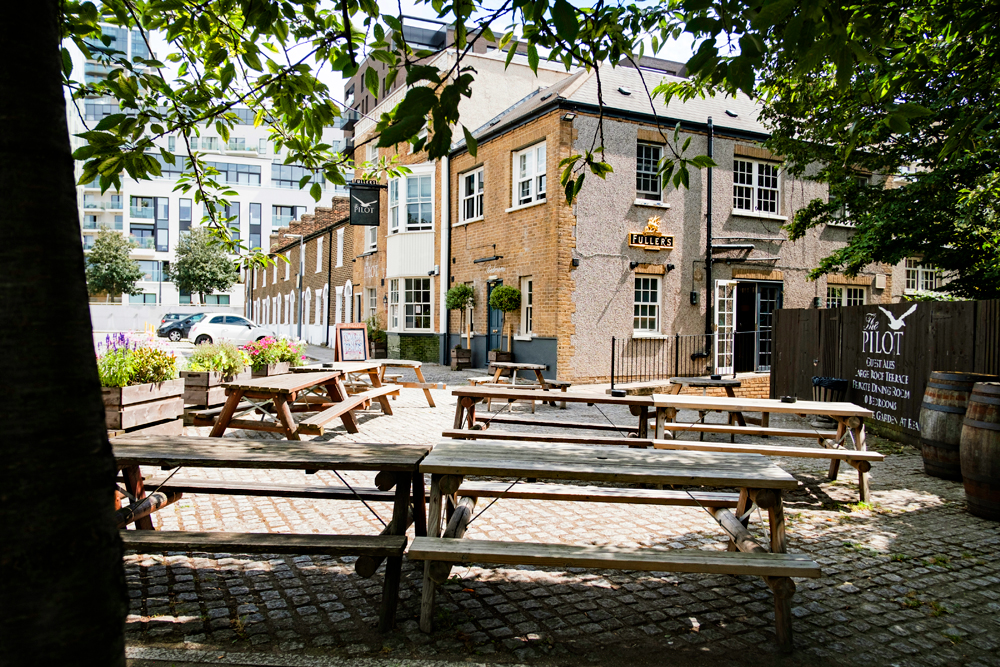 The Pilot in Greenwich, near the O2, boasts great food, charming rooms and fabulous outdoor spaces. But more than a pub with rooms, The Pilot is a London time machine.

Use your imagination and travel back through the centuries with us as more than 220 years of London history swirls around this atmospheric pub.

The beginnings of the Pilot in Greenwich

Visit the Greenwich Peninsula in the very late 18th century at the start of the industrial revolution and the site of The Pilot is a plot of marshy land owned by a soap manufacturer with established works upriver near Blackfriar’s bridge. In 1801 he agrees to back an entrepreneur who has invented a tidal mill, a mill operated by the energy of the rising and falling tides. 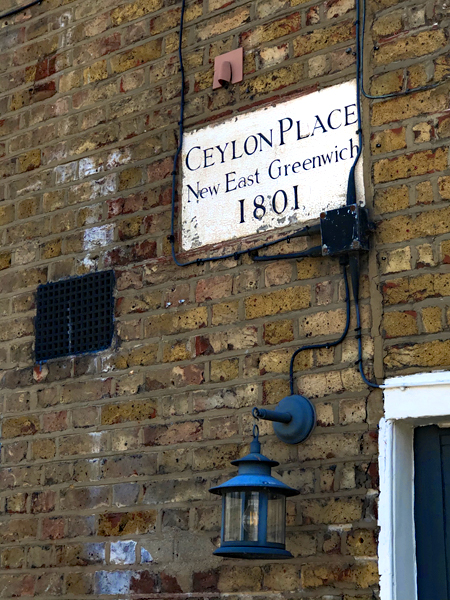 Ceylon Place, started in 1801 was probably named to mark a recent British takeover of Sri Lanka (then called Ceylon) first, by treaty, from the Dutch and then, through colonial wars, from the local Kandyan kings.

Earlier the land had been leased to a group of former politicians including two former Prime Ministers William Pitt, 1st Earl of Chatham, and his son, William Pitt The Younger, fresh from leaving office. Although some people theorize that there was a ferry from the peninsula at that time, the name of the pub, The Pilot, probably doesn’t have maritime connections. Instead, it’s most likely a reference to Pitt the Younger and a broadsheet of the day that calls him the pilot who weathered the storm.

By 1801, a six-storey grain mill, powered by the tides, is in the works along with the buildings on River Way. The terrace of cottages is known as Ceylon Place. It’s made up of Georgian mill workers’ cottages framed, at one end by a pub, The Pilot, and at the other by a grand house with lawns and gardens reaching down to the Thames.

As is customary at the time, the cottages have long gardens so that working families can grow some of their own food. They look out across mill ponds and meadows dotted with grazing livestock and a thatched barn.

The London time machine moves on

Fast forward to the mid-19th century. In the 1840s the mill – which by now may be steam-powered – is purchased by an industrial chemist who establishes a chemical plant. Through his activities, the green and pleasant site begins its downward spiral into the worst of 19th-century industrial hells.

Eventually, there are gas works, tar manufacturing, a steelworks and the manufacture of ammonia, ammonia salts and all kinds of acids made from byproducts of purifying coal gas for home lighting.

One particularly unpleasant product made at the site is something known as manure but which bears little relation to the farm product we know today. In a 2013 article for Greenwich Peninsula history, author Mary Mills describes it this way:

“The manure was made from ‘shoddy’, waste leather, dry bones, bone ash and  refuse from sugar bakers – that is whatever organic rubbish could be bought cheaply. It was then piled up and mixed with sulphuric acid.  The smell can be imagined…”

And yet, in the midst of all this, the Georgian cottages and the pub remain. In fact, several more cottages are built on River Way in the 1840s. But the big house on the river end is gone and the spacious gardens have been shortened to make room for a drainage ditch. Dammed with a sluice gate, the ditch and the marsh ponds become stagnant and smelly. The smells from the factory works can be detected for miles down the river. In the 1870s, the medical officer for Greenwich weighs in with opinions on the nuisance. In 1900, rear extensions to the cottages further reduce the garden space.

The Pilot in Greenwich endures

It’s the 20th-century. Throughout the century, the industries change and alter but the pub and the terrace of cottages remain, surrounded by some of the most polluting industries in the world. The fields and mill ponds are long gone and the soil is too toxic for anything to grow. Gas companies, gas storage, electric power generation – a changing array of industrial operations continued to occupy and pollute the area. With the advent and increased use of natural gas, the age of the big, smelly gasworks is ending.

The Greenwich Peninsula gasworks has been one of the largest in Europe. Now deactivated and without a use, it is also one of the largest contaminated sites in the country.  In 1998, with the Millennium approaching, the cleanup begins. Toxic soil to a depth of three to four metres – and in some areas as deep as 14 metres – is treated or removed.

The same year, English Heritage grants Grade II listing to the terrace of Georgian cottages that includes The Pilot. The listing describes the Ceylon Place cottages, many of which retain original features, as “…the earliest surviving residential development on the East Greenwich Peninsula…” and “A rare survival of late Georgian artisanal housing.”

And construction of the controversial Millennium Dome begins.

The Pilot today – A perfect bolt hole for the O2

On the outside, this handy 220-year-old bolt hole hasn’t changed much at all. Except that now it’s not surrounded by stinking chemical factories, gasworks, ammonia, acid and manure plants. Instead, a large green park spreads out between it and the O2. On the river side, it’s bounded – dwarfed actually –  by its latest Greenwich neighbours, the ultra-modern residential apartment towers that have colonized the peninsula in the 21st century.

Meanwhile, The Millennium Dome may have been an embarrassing failure for the government but reborn as the O2 Arena, now owned by a global entertainment company, it’s one of the largest and most successful music venues in the world.

And The Pilot, now a Fuller’s pub, is just a 10-minute walk away.

Who knows what the next few hundred years might bring for this eccentric outpost of the early 19th-century in the midst of one of London’s newest communities?

Staying at The Pilot in Greenwich

Outside, the Pilot may be relatively unchanged but inside it has thoroughly modern comforts in a period influenced style. There are 10 individually decorated B&B double rooms, suitable for couples or singles. All feature luxury mattresses, Egyptian cotton linens, small but stylish ensuites and free Wi-Fi. As a nod to the proximity to the river, the rooms all have window screens, an unusual American touch, rarely seen in the UK.

At the top of the inn, a quirky Captain’s Cabin has a porthole window and seafaring decor. Front rooms have views of the park and the O2 Arena beyond it. Parking is free – a real boon if you are visiting the historic areas of Greenwich during your stay.

Rooms at The Pilot in Greenwich

Room photos courtesy of The Pilot and Fuller’s Pubs 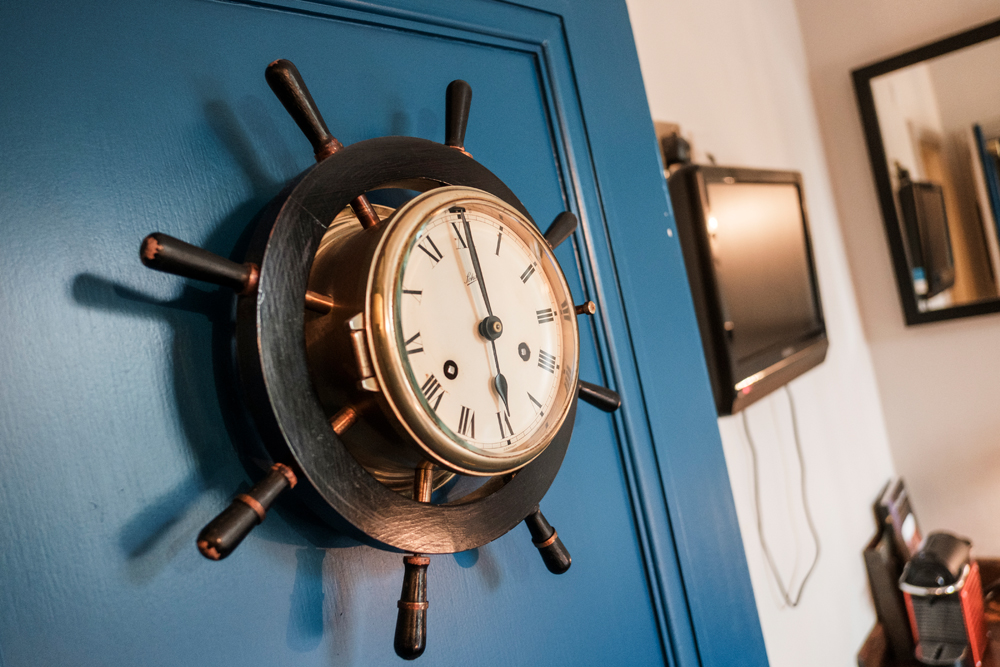 Period and nautical details at The Pilot in Greenwich 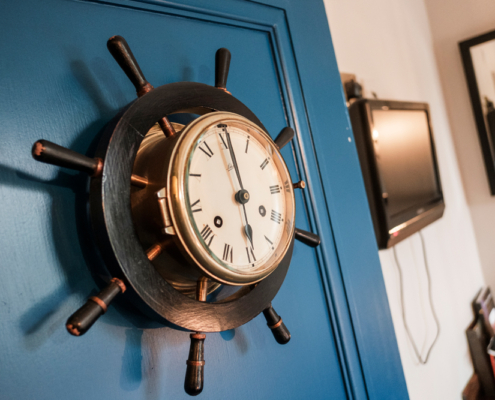 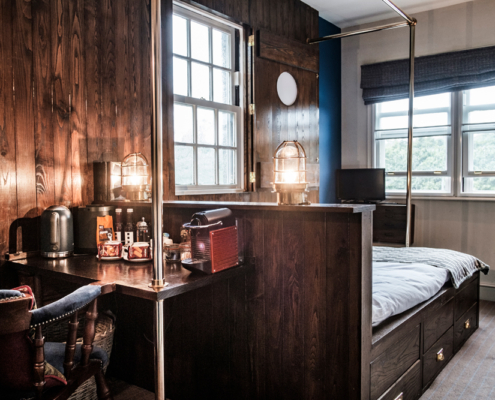 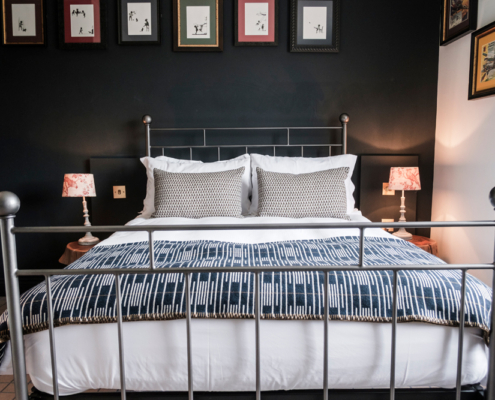 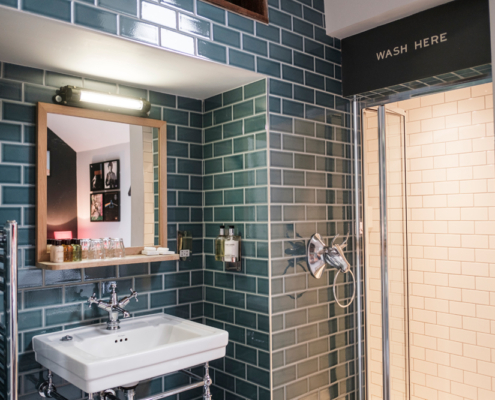 Food & Drink at the Pilot

Behind The Pilot’s compact Georgian front, extensive bar and dining areas spread out on several levels – including a bright, floral garden room – leading to a large, multi-level beer garden. Given its location, the Pilot has a remarkable variety of outdoor spaces for drinking and dining. There are gardens to the side and rear, a roof terrace and a multi-level and beautifully landscaped beer garden with tables under cover and open to the sky.

The seasonally changing menu includes a few reliable classics – beer-battered fish and chips, burgers with Gouda and pickled red onions. But it excels in more ambitious dishes – slow-braised beef with Chinese vegetables and spices, roast salmon with grilled lettuce and green olive and raisin salsa. The vegetarian choices look tempting too. And the chef really goes to town with puddings. Caramelised mango crumble, anyone?

Breakfast is included in the room rate. Guests staying at the Pilot get a discount on other food and drink.

Views of the beer garden and roof terrace 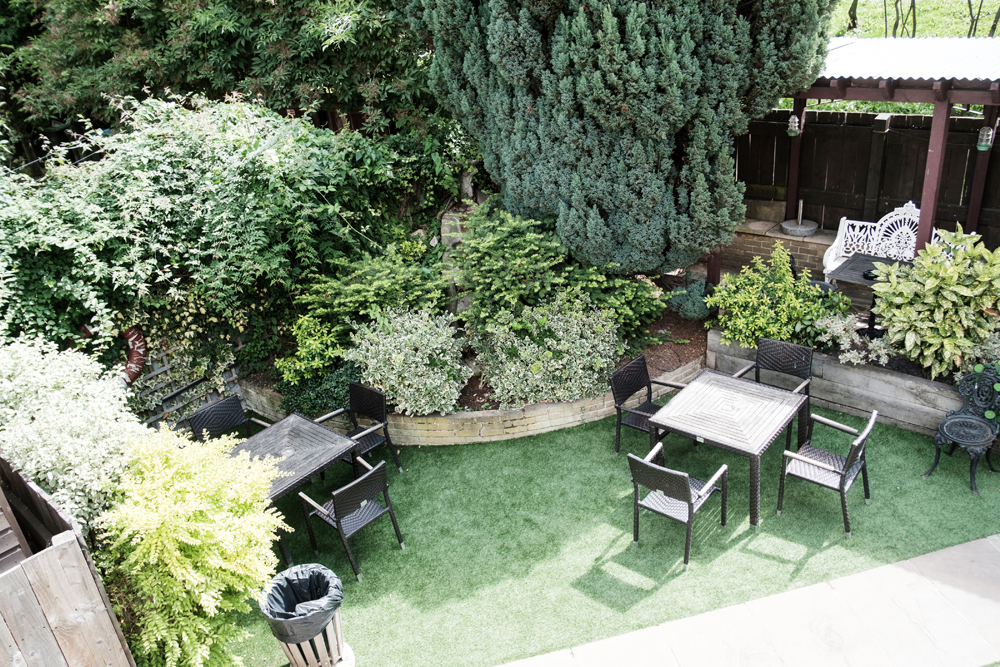 From the terrace at The Pilot 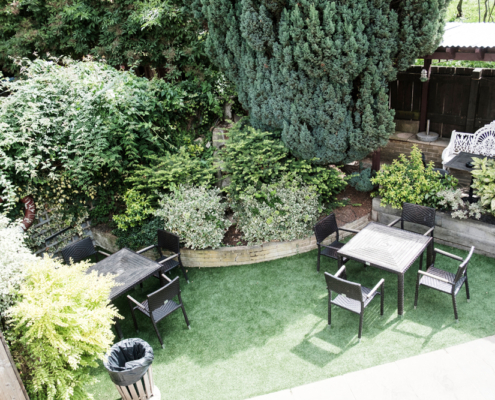 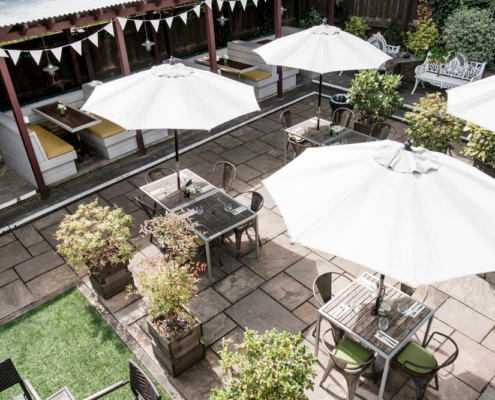 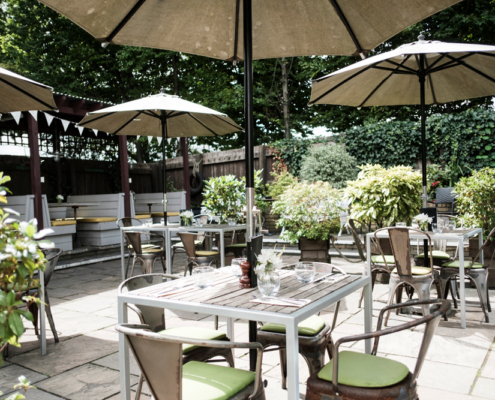 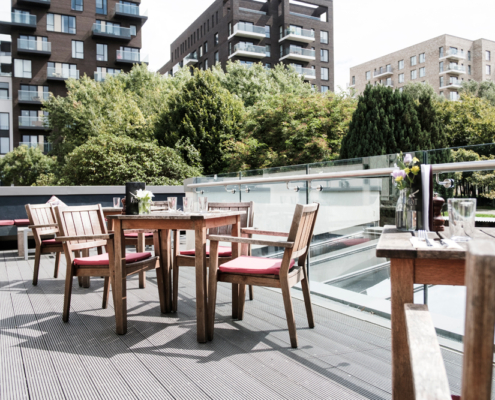 Planning a visit to the O2?

The Pilot in Greenwich is exceptionally well placed for a different kind of stay after a concert or event at the O2 Arena.

And this autumn, as pandemic restrictions begin to wind down, the venue has scheduled a series of “Welcome Back” concerts for all tastes. If you are fully vaccinated and can show a COVID Pass, you can book shows that range from oldies but goodies like Blondie, Genesis, Erasure, New Order. Alanis Morisette and even Tom Jones, to such contemporary acts as JLS and McFly. The Fugees will appear as part of their first live tour in 25 years. Check out their website to book.

What’s else is nearby?

The Ranger’s House, on the edge of Greenwich Park, stood in for the Bridgerton family home in the popular Netflix series. Pose in the drive while you wait for your carriage or visit a diamond magnate’s fabulous collection of paintings, jewellery and porcelain inside. It’s about a mile away and a short taxi ride or uphill hike through Greenwich and Greenwich Park.

Take a bus or taxi into the centre of town to visit:

Visit the Bridgertons at Ranger’s House