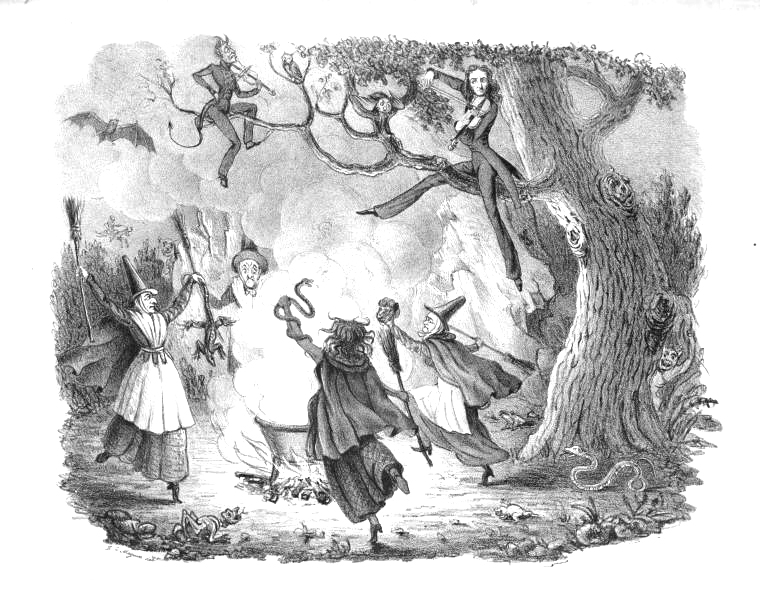 They confessed and they never recanted. More than 400 years after the most famous witchcraft trial in British history, the story of the Pendle Witches lives on, still haunting some of the strangest walking country in England.

Pendle Hill hangs heavy over a stark and empty East Lancashire landscape of heath and high moors that modern hikers and cyclists find strangely beautiful. Here’s what I jotted down in my notebook when I passed over it on the Ribblehead Viaduct of the Settle to Carlisle Railway:

Picture that landscape on a cold winter afternoon, scoured by winds under a heavy sky, beneath the brooding, 557 meter bulk of Pendle Hill. 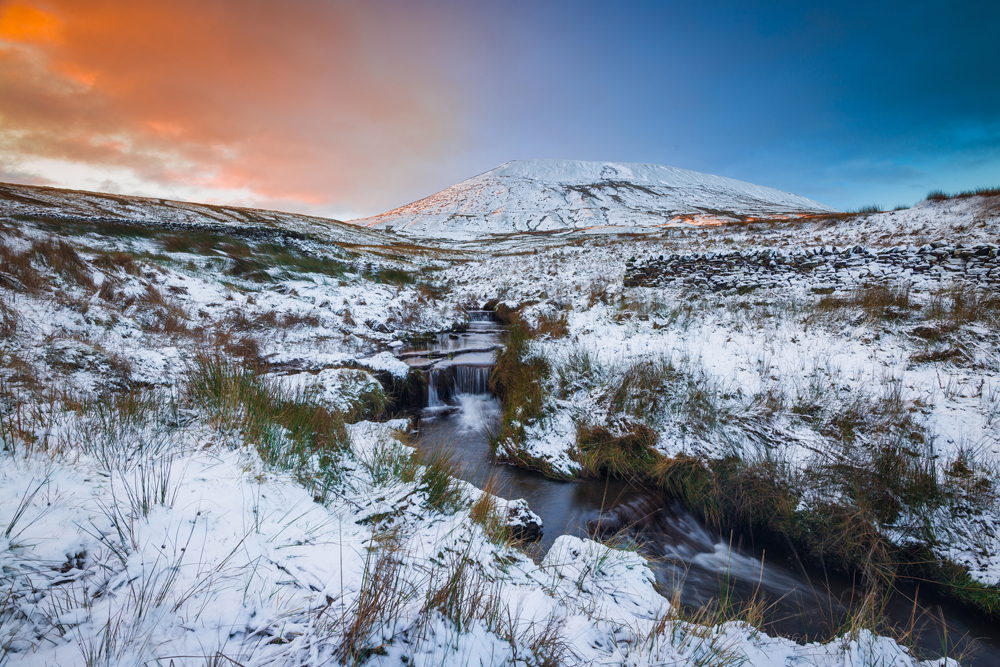 A world ready for a witch trial

Now imagine, if you will, that same landscape in the winter of 1612; no lights, scarce food and warmth, remote, suspicious and cut off from the rest of the world.

After the destruction of the monasteries during the English Reformation, the region was left with little spiritual guidance and no regular clergy. Lancashire still hid pockets of secret Catholics. In an England under the fiercely Protestant James I, the rituals of Catholicism and even a whiff of its Latin tongue were often branded witchcraft.

Fear of and belief in witchcraft flourished in this atmosphere.

Who were the Pendle Witches?

The story of the Pendle Witch Trials is one of the most famous and well documented episodes of witchcraft hysteria in English history. From March 1612, when the episode began with a roadside incident and a naive confession, to August, when it ended with the execution by hanging of seven women and two men and the death of an eighty year old woman in the dungeons of Lancaster Castle, an atmosphere of jealousy, fear, accusations, rumors of devil worship, witches’ sabbaths and murder gripped Pendle and surrounding villages in the shadow of the hill.

The so called witches were among the poorest people in the community, members of two competitive families headed by elderly matriarchs. Social outcasts who existed on the edge, some may have had physical deformities or mental handicaps. They lived by begging, casting spells and curses and kept starvation at bay by what amounted to an early 17th century protection scheme. People in the villages had long tolerated them and often gave them what they wanted rather than risk being cursed.

And unlike the Salem “witches”, who always protested their innocence and who were pardoned en masse within a decade of the infamous Massachusetts trials, most of the Pendle witches believed in their own powers. No one was ever pardoned and none of the communities involved ever repented of the trials and executions.

According to contemporary reports, Alizon Device, granddaughter of her family’s matriarch – the “witch” known as Old Demdike – had an encounter on the road with a peddler over some pins she refused to pay for. She called on her familiar, a black dog, and cursed the peddler. When the man collapsed, paralyzed on the road, a few steps further along, she believed she had caused it (modern writers guess he had a stroke). When she was later accused, she confessed and sought her victim’s forgiveness. It’s likely that what happened next was set off by competition for local dominance between Old Demdike’s family and the family of the other 80-year-old matriarch, Anne Whittle, known as Old Chattox. Soon one accusation followed another. Curses and deaths going back decades were attributed to the men and women of the two families and their associates. And, since the casting of minor spells and curses was part of the fabric of everyday life in the area, many of the accused confessed to casting spells and believed they were effective.

The public hysteria, claims and counterclaims, dragging up of old cases of mysterious deaths, one defendant testifying against another and cases of child abuse were not different from many other witchcraft trials. But what made this case special (and especially evil) was the star witness, nine-year-old Jennet Device. She was the daughter of Elizabeth Device, one of the accused. During the trials in Lancaster Castle, the child was lifted onto a table in the courtroom. There she stood and related the various ways in which she knew her mother was a witch, She named and identified the people present at a meeting in a place called the Malkin Tower. Local gossip – and the judges – considered this meeting a witches’ sabbath.

Eventually, Elizabeth Device was one of the ten witches from the Pendle area convicted and hanged – largely on the testimony of a child who also testified against her grandmother, brother and sister.

The trial set the precedent of allowing a child to testify to witnessing witchcraft that was later cited in the Salem witch trials in Massachusetts.
Read more about Jennet Device. 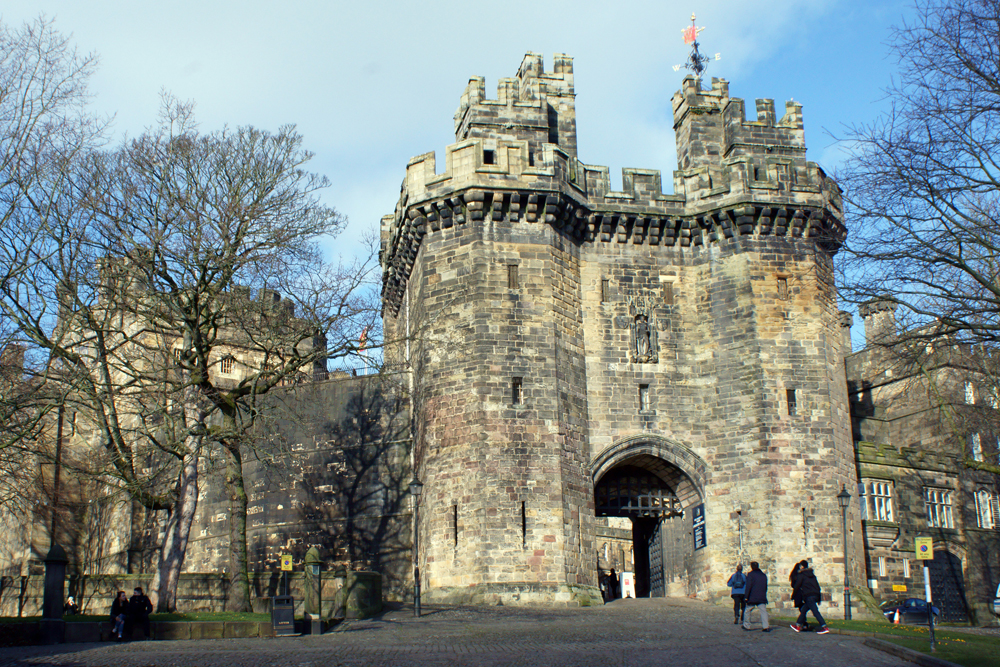 Lancaster Castle, scene of the trials and one of Britain’s most haunted places. photo by Gidzy, ccl

Very few of the landmarks from the era of the Pendle witch trials remain though Pendle Hill stands as witness to the terrible events. There are several exceptions where visitors can get a feeling for the times:

Visit Lancaster has put together a series of self-guided tours that you can follow on foot, bicycle or by car. The tours take you through the atmospheric villages and landscapes that that featured so prominently in the Pendle witch stories. The Visit Lancashire – Lancashire Witches website has downloadable brochures and maps for Pendle Witches Car Trails, Pendle Hill Walks and the Walking with Witches trail.

If spending time out of doors in Britain’s most haunted places appeals to you, (especially as indoor ghost hunts are off-limits during the COVID19 crisis) check out my recommendations for outdoor hauntings for Halloween.

Another claim to fame

The mysterious, brooding hill that played such a prominent role in the Witchcraft episode has another claim to fame. In 1652, George Fox felt compelled to climb to the top of the hill. There, he had a vision which led to his founding of the Quaker movement.

Main illustration of a witches sabbath, top, from the NPLDigital Collection

Travel treats for an easier journey

Dishes From Santorini You Can Make At Home