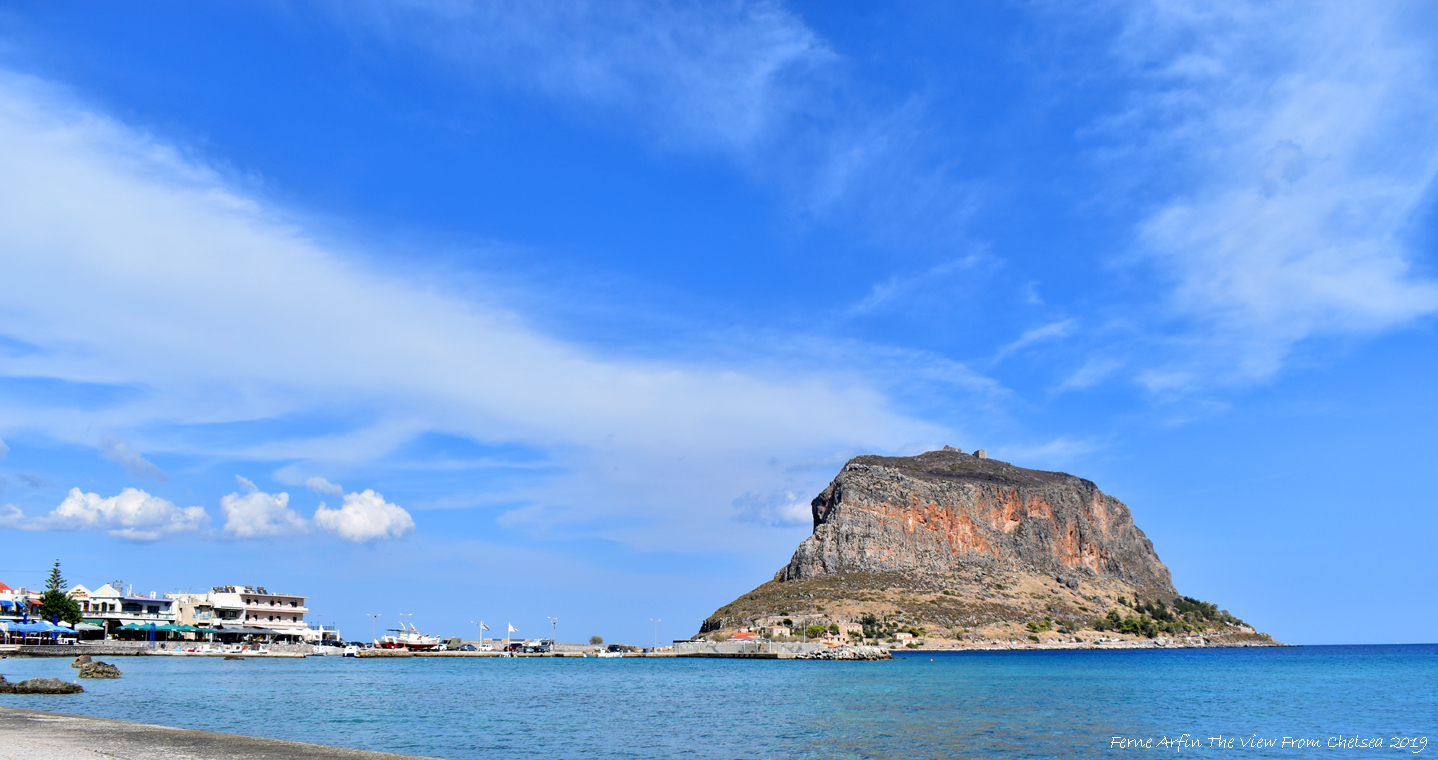 Monemvasia – The secret of the Peloponnese

Nothing really prepares you for the sight of Monemvasia, the romantic inhabited rock that rises straight out of the sea.

This remarkable place, off the easternmost finger of Greece’s Peloponnese region, is only about a quarter of the size of the Rock of Gibraltar (to which it is always compared). But Monemvasia’s vertical bulk, towering about 330 feet over the Aegean sea, is every bit as dramatic. And, no matter how much we’d read about it beforehand, our first view left us gobsmacked.

Driving in this part of Greece is never easy once you stray off the main motorways. Local directions are vague, the maps you can buy (even the ones we bought in top London travel book store, Stanfords) are all in Greek. The safest way to navigate is to make sure you have good coordinates or postal codes, rely on a good SatNav and hope for the best. The trouble with SatNavs, of course, is they don’t give you much of a general picture. It’s all turn left here, turn right there – the micro details that will get you there in the end – but you never get much of the big picture.

Which is all a roundabout way of saying that I’m not terribly sure what town we came from or what road we were on. But we were driving south along the coast road of the province of Laconia when we had one of those oh-my-god-there-it-is-holy-s**t moments and… well… there it was turning all kinds of colors in the setting sun. During the course of the next few days, we got to see the citadel of Monemvasia from every angle and in all sorts of light and we finally got to climb all over it. It did not disappoint.

First a little history of Monemvasia

But just a little history, because the story of this place – and castle – is so complicated you could write a doctoral dissertation about it.

Monemvasia became an island in the fourth century when and earthquake severed its fragile connection to the mainland. It remained an island for more than  1600 years until the building of a short, narrow causeway and bridge connected  it to the Greek mainland as recently as 1971. 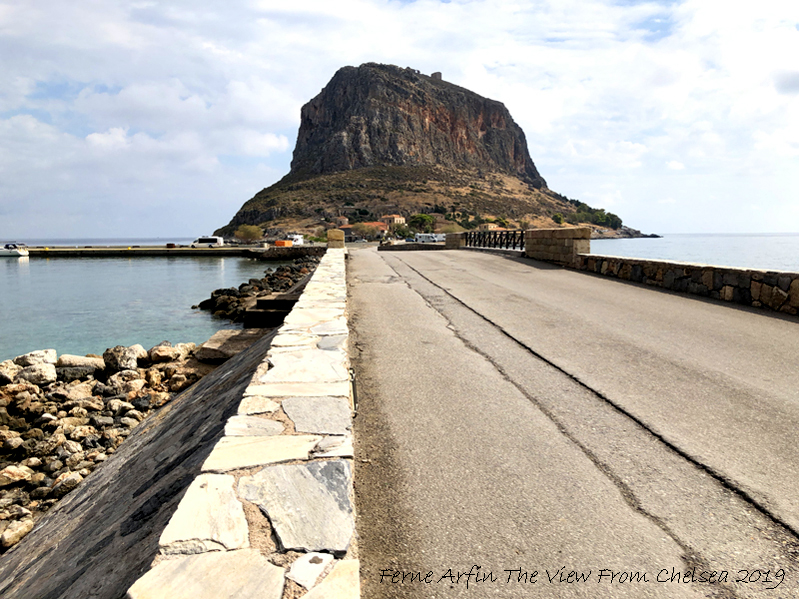 The 200-meter long bridge and causeway to Monemvasia from the mainland was only built in 1971. Before that, it was an island for 1,600 years.

Byzantine Christians, fleeing marauding barbarians from the east, first settled the rock in the 6th century. After that, the political history of the place is a chaotic feast of battles and rulers. It was a base for Frankish warlords, the Byzantine empire, the Venetians and finally, with the fall of Constantinople in the 15th century, the Ottoman Turks. They held on to it, more or less, until the Greek War of Independence in 1821, when Monemvasia was among the first castle towns to be liberated.

The event is marked all over the Peloponnese on July 23. Here, they commemorate it by re-enacting a pivotal naval battle, culminating with the burning of a boat full of fireworks. In 2017, the event was even more dramatic when the explosives started a fire in the scrub and brush clinging to this giant rock. It looked devastating on that evening’s news – but by next morning the word was Nevermind, no harm done.

So where is the castle?

Locals refer to the modern town on the coast as the city and the island rock  as  the castle or the kastro.  But reset your expectations. The city probably has a few thousand inhabitants at most and the castle has no towers or turrets. It is a fortified village, completely surrounded by its original walls. Built on a slope on the southwest side of the rock, facing Palaia Monemvasia bay, it is totally out of sight of land. A zigzag of a cobbled lane with flights of rough stone stairs leads up out of the castle to the top of the rock where there’s a church and the ruins of a monastery (aren’t there always at the top of things in rural Greece?). Other than that, there is only one way into the village, a gateway just wide enough for pedestrians and perhaps a donkey, at the end of a narrow, paved road about a kilometer from the bridge.  Apparently, the name Monemvasia derives from the Greek for this single entrance. To make it even more difficult for invaders to enter the village – or modern invaders like cars and motorcycles – the path from the gateway through the thick castle wall doesn’t go straight through but makes a sharp right turn halfway along.

The only way to get a sense of the castle is to see an aerial view so we are grateful to Alex Manos for making his drone footage available via YouTube:

Things to see and do in Monemvasia

Go to Monemvasia to explore its incredibly pretty twisting alleys and lanes, to enjoy its view of the sea and the mountains (you can’t see the “city” unless you climb to the top of the island, but you can see the mountains further along the coast) , to wander in and out of the little craft shops, cafes and bars that line the main route into the village. Unlike the Byzantine castle village of Mystra (not far away, near Sparta and once ruled by the same Frankish noble, William de Villehardouin) Monemvasia has never been abandoned. It’s been occupied by a small local population for its entire history. So most of the ancient houses in the lower village are in remarkably good shape.

Many are now small luxury hotels and self-catering apartments. Plan to travel light though. The only way to get your luggage to your room is to carry it across the rough cobbled streets and up the twisting stone stairways and stepped alleys that connect them – though some of the hotels and inns will send staff to meet you at the entrance to the castle to help. 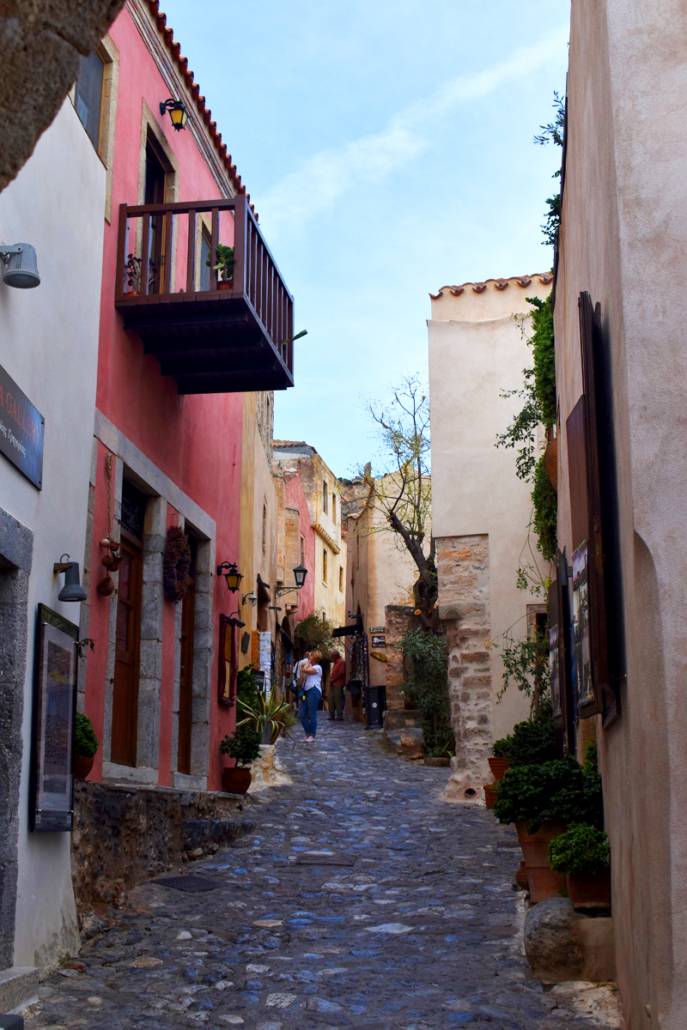 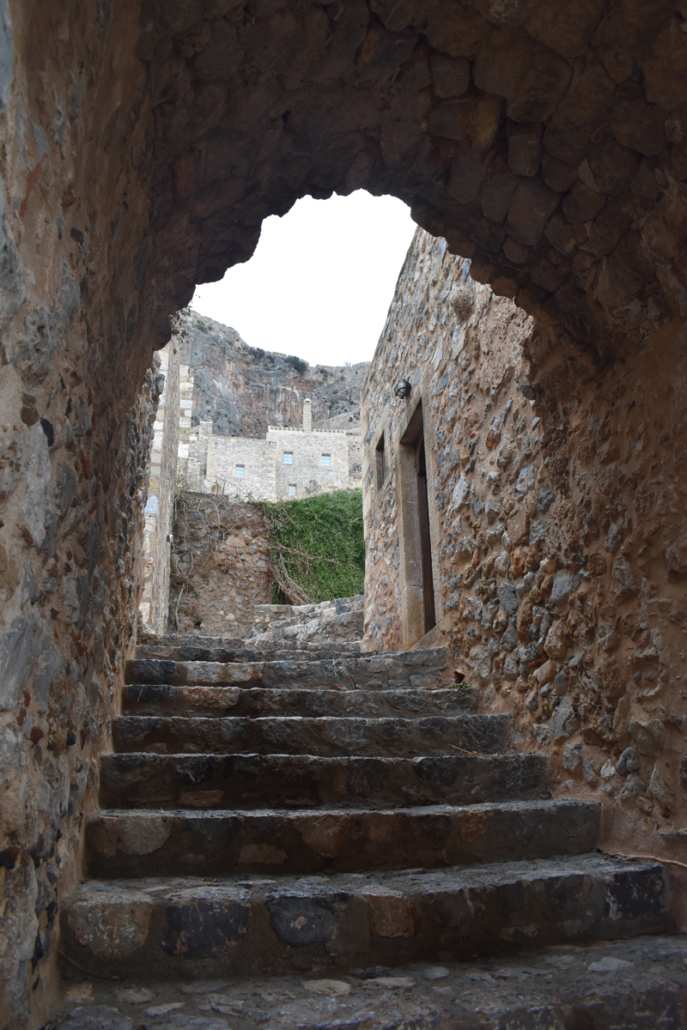 Among the island’s attractions, are a small archaeological museum in a former 16th century mosque, and 24 churches. Given the whole island is only about a kilometer long, that’s a pretty impressive number. But apparently there were once 40 churches here.  If you climb to the top (long and steep but not really difficult – bring water and a hat), look around Agia Sophia Church. Though not open to the public, the Byzantine church is perched so close to the edge of a cliffs it seems to grow out of it. Another Byzantine Church, Christos Elkomenos, is impossible to miss. It’s in the first large square in the center of the village.  Stop there to see the heavily guarded 13th century ikon of Christ Elkomenos. It was stolen in 1979, recovered shortly after in 1980 and was kept in the Byzantine Museum of Athens for decades. It was finally returned to the Monemvasia church in 2011. Today is kept in the church’s Chapel of St John in a heavy wooden box, behind several sheets of glass and contantly monitored by security cameras.

But really, the main reason for going to Monemvasia is to simply enjoy the utter romance of the place. Its apparent isolation makes it ideal for honeymooners and naughty weekends; yet you can walk – or take the local bus across the causeway to the city for access to sandy beaches along the coast, more restaurants and tavernas as well as shops that sell everyday necessities.

Just a few of the 24 churches that dot Monemvasia. Click images for full pictures. 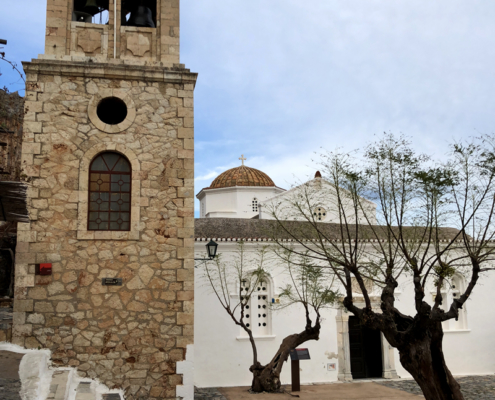 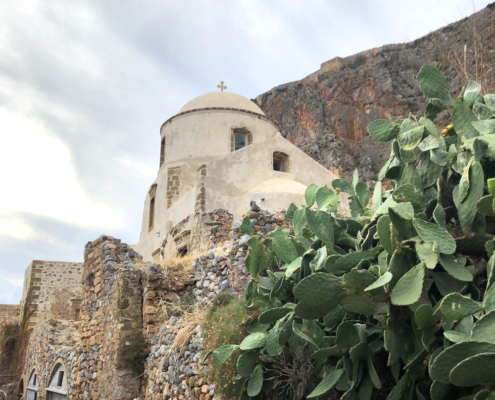 How to get to Monemvasia

Monemvasia’s connection to the Peloponnese and mainland Greece is 187 miles (300k) from Athens airport. The main way to get there is a four to five hour drive.

Viator, the travel excursions and vacation extras booking company, have just listed a quite reasonably priced transfer by private car from Athens Airport or the port of Piraeus to Monemvasia. Click here for the details and how to book.

You can also charter a boat to sail to the island in style. Check out Greek travel expert Matt Barrett’s Sailing in Greece pages  for ideas about charters and captains.

Just to confuse you, Monemvasia city is sometimes called New Monemvasia or (on maps) Gefyra, which means bridge, to distinquish it from the island, also referred to as the castle (get used to it – everything in Greece seems to have at least two different names).

From New Monemvasia, you can drive across the causeway. There is a small (very small) parking area near the entrance. Or you can leave your car in the large, free parking area just before the bridge – and walk or take the local bus to the fortress gates. It leaves about every half hour from outside the tourist information office at the foot of the bridge and costs (in 2019) 1.25€

Click here for advice and reviews about where to stay and places to eat. And check out my article One Week in the Peloponnese – The Perfect Itinerary, on TripSavvy.com to find out more.

See what other travelers think, find things to do and places to stay in Monemvasia on Tripadvisor

Where to stay near Monemvasia – deluxe or budget?
The View From Chelsea uses cookies to improve your user experience. Find out more about our cookie policy.
Scroll to top